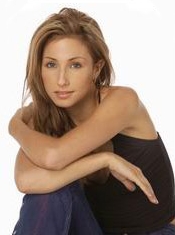 19/02/2013 : Discover the videoclip of Jacynthe's current single Locked Down

12/01/2013 : Jacynthe's new single will be entitled Locked Down and will be released on January 14th. It will be the first single from her forthcoming album More infos.

25/11/2012 : Jacynthe shot the videoclip for her current single. Video was produced by Jet Films.

Jacynthe (real name : Jacynthe Millette-Bilodeau) is a Canadian artist who sings in French, English and Italian. Born September 13th, 1979 and raised in Quebec, she began to sing at the age of 3 and wrote her first song when she was only 7. Her Mum was a nurse, so was her aunt, she also had some doctors in her family. However everyone in her family had a deep love for music.

For over a year, Jacynthe has also sung the national anthems at all "Montreal Impact" soccer games. She spent also three years as the soloist of a gospel choir. She was introduced to her current producer Paul Galati as she was still at school. She writes herself the major part of her songs. She worked with the most well-known composers, such as Carlsson and Elofsson, or Desmond Child, who also wrote for stars such as Britney Spears or Jennifer Lopez. Jacynthe also took part to a collective project called 5Xnon (together with artists like Venus 3 or Groovy Aardvack), a rock opera to fight against violence to women.

Her 2 best singles are definitively This Is The Night and Try My Love (including a B-side called (B side If You Leave Me Now). It was actually the first single she recorded and released when she was 16. It had a huge success on the dancefloors in Quebec. Sadly for eurodance fans, she changed afterwards to more pop-oriented musical trends...

In 2005, Jacynthe co-starred in a very successful French TV show across Canada called La vie rurale (French adaptation of the Simple Life starring Paris Hilton and Nicole Richie). The Americans took notice and she was invited to New York to appear on ACCESS HOLLYWOOD and INSIDE EDITION.

In 2006, Jacynthe addeds her energy and her powerful voice while on a US tour from January 2006 to December 2006, taking her to every major city in the United States for Cirque du Soleils musical extravaganza, DELIRIUM.

In November 2007, Jacynthe lived out a special experience with the foundation Dreams Take Flight/Voyage De Rêves. Each year, employees of Air Canada become volunteers and organize a day trip to Disney World in Florida with approximately 150 children coming from everywhere in Quebec who are physically, mentally or socially challenged children. It is a voyage that lasts one full day of which is a dream trip for the children. Jacynthe was invited and was honored to take part as a special guest along with the dedicated doctors, nurses and all others which are also invited as volunteers. This is truly the trip of a lifetime for these special children!

She went back to studio writing new songs for her fifth album to be released in 2008. Her first single and her album were planned to be entitled Handle Myself.

In January of 2009, Jacynthe spent a week in Italy and recorded two songs with Italian artist Alessandro Ristori (from Dont Worry Records, owned by Rolando DAngeli) shot a video for These Boots Are Made For Walking, 2 photo shoots and a show as a featured guest with Alessandro for a live DVD that will be released in Italy. The video of These Boots Are Made For Walking were planned to be released in Italy this Fall and then in Russia and Japan.

2010 : she performed as support act for Kate Ryan during her Canadian tour. In February, she released a cover of the song L'Espion (originally sung by Michel Pagliaro). In September, she released a new single entitled Don't Touch Those Faders.

2012 : she was featured on the French version of Victoria Duffield's single Feel and this version is #1 in the Top 25 francophone

2013 : Jacynthe's new single was entitled Locked Down and was released on January 14th. in April, Jacynthe announced that she was pregnant. She gave birth to a baby girl called Gemma on September. Her new album Music To The Sound was out in December.

2014 : Jacynthe's new single Born to Love You was released in March.

2015 : in December, she gave birth to a second baby girl called Nina. Jacynthe writes music for other artists, such as newcomer Angelike. She did a pause to care about her children.

Jacynthe Official website at www.jacynthe.ca
Jacynthe homepage
Thanks to reBeL, Gianni and Abelito

Listen to Jacynthe on Radio Euro Classic, the eurodance radio