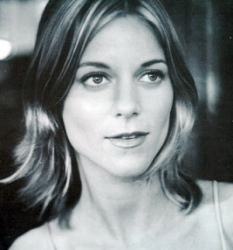 Silja was born Celia Gruss in Paris. Her mother was born in Memphis and her father was a talented French blues piano player. She has one brother who is a journalist and lives in Florida. Legend said that her mother chose her first name after reading some old English poems. It was also the first name of a good friend of hers. Silja grew up in Paris, London,Washington D.C., and Los Angeles (where she studied in a French school, before beginning sociology studies). She sung in a classical choir when she was a collegian. A stay at the Berkeley School of music and meetings with several musicians like Taj Mahal and Ben Harper convinced her to begin a musical carreer. She went back to France in order to find a job, she lived in one mother's friend's house. As she was selling American newspapers, she met a guy who offered her a job of secretary in a graphic arts society. She refused, and told him that she would like to begin a musical carreer. Several days later, he invited her for a lunch with a producer (Michael Cretu, creator of Enigma). This is how her first single How Could I Find Love was finally released in 1994.

For the second single Time For Eternity, the video-clip was shot in a car trash in Halifax near London, where ravers meet and dance together. In 1995 Silja released her third single Flesh And Fire, from a forthcoming first album which unfortunately never came out. For once, it was produced by P. de Saint-Front and David Fairstein (who, with P. Simpson, was behind projects such as Latino Party, Latino Inferno, 2 Pirates In A Club, Ibizaa...). Afterwards, everything became very quiet about her.

She describes herself as being full of tenacity but not very patient. She hates unpolite people. In a man she appreciates his sense of humour. She likes eagles. Her favourite song is Eyes Of The World of the Grateful Dead. She likes Jimi Hendrix, Joni Mitchel, and admires Magic Johnson and Liz Taylor. She likes rock, funk, disca and music of the 70's. She likes chinese cooking. She always choses futuristic clothes for her live appearances but in private she prefers wearing simple

After 3 excellent Eurodance singles and a pause of 2 years, Silja's carrier was oriented towards a totally new direction : French pop songs. She even released an album totally in French. She lives in Montmartre.

2004 : Silja did vocals on the songs I Melt With You and Wishing on Nouvelle Vague's first album (a collection of new-wave and post punk covers featuring various female vocalists). She contributed to the sountrack of French movie "Le plus beau jour de ma vie" with the song Tes p'tits défauts. She also recorded songs for a childrens' book published in France, as well as voices for TV ads, and for several other French movies. Silja has also completed 4 new pop electro songs with Marc Collin.

2006 : Silja sung on track Let Me Go on Nouvelle Vague's second album, which hit the stores in July. In October, her cover of Bob Marley's I Shot the Sheriff was featured on Amnesia Chill Out 2 compilation. On October 15th, another song featuring Silja called Futures was featured on the latest Dark Globe album.

2009 : Silja keeps on co-writing for TV ads, and finished recording a song for the third Nouvelle Vague album, a cover of Simple Minds' The American, which was out on 8th June 2009.

Thanks to Nico and Abelito

Listen to Silja on Radio Euro Classic, the eurodance radio