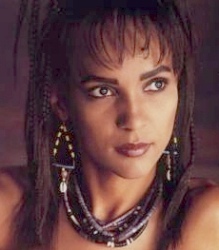 03/02/2020 : Rozalla's record company announced that her new album was almost ready, and that a single was on its way...

11/10/2018 : Rozalla shot the videoclip for her forthcoming single Turn On The Light.

Rozalla was born on 18 March 1964 in Ndola, a town in Zambia. When she was a teenager she moved to Zimbabwe with her family. As a young girl she used to skip school to play with a band. Later she sang at fashion shows and soon became a national celebrity. Rozalla enjoyed several chart hits in Zimbabwe, but she still had to work as a secretary to make ends meet. At the age of 18 she appeared as an extra (a prostitute) in Richard Chamberlain 's King Solomon's Mines.Wanting to become an international star Rozalla realized that she was never going to get anywhere if she stayed in Africa. Therefore she left Zimbabwe and moved to London in 1988, not knowing what awaited her there.

In England Rozalla was soon discovered by the Band Of Gypsies production team (the producers Nigel Swanston and Tim Cox) who noticed her deep, soulful voice and would catapult her to stardom a few years later. In 1990 their first single, the dance song Born To Luv Ya, was released on the small label Pulse 8 unfortunately without any success. Not discouraged the Band Of Gypsies wrote and produced some more songs for Rozalla and her second single Faith (In  the Power of Love) was her first song to chart in the U.K.

But it is the single Everybody's Free (To Feel Good) which really made her career take off. It was not only a #1 dance hit in Canada and the U.S., but it was also #1 in Spain, #2 in Belgium, #3 in Italy, #4 in France, #5 in Germany and #6 in the UK. Followed the re-issued Faith which did much better the second time, and the very successful Are You Ready To Fly.

Rozalla's first album Everybody's Free was released in 1992. All the songs were produced by the Band Of Gypsies. The album entered the U.K. Top 20 in its first week. Rozalla signed a contract with Epic who released her album and singles in the U.S., wher Everybodys Free reached the Top 40 of the Billboard Hot 100 almost a year after its European release. This came after something of a legal squabble, with Rozalla attempting  to take the studio tapes to Epic. Pulse 8 objected and won their day in court. She also toured with Micheal Jackson and started working on the follow-up to her successful debut CD. A remix CD of her hit singles Everybody's Free-style was also released.

Look No Further was the name of her second album. Released in 1994, it was a multi-genre album which featured the production skills of DNA, Lamont Dozier, Andre Betts, John 'Jellybean' Benitez, Frankie Knuckles or Apollo 440. It contained great tracks such as You Never Love The Same Way Twice, Losing My Religion, I Love Music, and many more. Rozalla gave up her African look, she was launched as a crossover pop soul diva. I Love Music, the first single, was the soundtrack to the Sean Penn film 'Carlito's Way'. The US release contained a track not available on the UK release entitled Free The Love.The UK release contained a non-US album track named Love Work. Nevertheless Look No Further did not reach the success of the first album.

After a one-year silence Rozalla enjoyed success with a remixed version of Everybodys  Free in 1996. Afterwards came Feelin' Good, an album that was released in the U.S only, a sort of best of.

Rozalla finally released a third album in 1998 Coming Home, only in the UK (because Popular  who were supposed to release it in the US  had some problems which prevented its release). Once again she worked with the Band Of Gypsies  and co-wrote most of the songs. The first singles to be released were Coming Home, Don't Go Lose It Baby, and Don't Stop The Lovin'. Rozalla has also released a non-album track in collaboration with Phat N' Phunky Friday Night.

Rozalla has achieved massive international success and has been hailed as The Queen of Rave. In her native Zimbabwe she had already garnered an impressive five #1 singles, establishing her as their top female artist. Her distinctive vocal style and melodic Techno/Rave songs have helped to propel Rozalla into the realms of international stardom. In total, she has earned ten international top 10 singles. Meanwhile Rozalla also got married. She lives in London and is still a popular club attraction.

2000 : Rozalla was working on a new album for a new label (Mikeli Music). Richard (Humpty) Vission mixed a new version of Everybody's Free, released in July 2000. This is the follow-up of a long series of covers for this hit : among them, a single by Blümchen (Ich Bin Wieder Hier), and by Alice DeeJay (Everybody's Better Off)

2001 : on June 11 her new single Everybody's Turning Back was released on the Balloon/ZYX label. It's a collaboration with Gitta : the song is a mix of the her song No More Turning Back with the Everybody's Free vocal over it. Later this year Rozalla will also return with new material.

2002 : Rozalla teamed up with the German dance act Aquagen to reinterpret her biggest hit Everybody's Free. The single is already on Germany's Top 40 singles chart.

2003 : Rozalla released a single called Live Another Life with Plastic Boy. Released under the lable Inferno, it entered the UK singles chart at number 55 and peaked #11 on the dance singles chart. Plastic Boy (real name Dirk M.I.K.E. Dierickx) is a Belgian producer who also released singles under Push, such as Universal Nation, Strange World and The Legacy (both reached the top 20 of the UK pop charts). Live Another Life as instrumental version used to be released as promo in 2000. The new version was recorded with a sensational uplifting vocal by Rozalla.

2004 : Rozalla will release her first official Best Of Rozalla album on the 15th of March in the UK. Her cover version of Janet Jackson's Alright was released as promo 12" and as CD in July. She also re-released her rare third album Coming Home as a limited edition, available exclusively on her website.

2005 : Rozalla released a new remix of an old hit : You Never Love The Same Way Twice 2005 in Germany under ZYX. She performed on the UK 1ITV series Hit Me Baby One More Time, in which yesterdear's stars perform their biggest hits plus an interpretation of a more recent hit by another artist. Rozalla sung Everybody's Free and a jazzed up cover version of Blue's Fly By on 30 April. Other artists who took part to the show were Belinda Carlisle, Haddaway and Gloria Gaynor.

The new remixes of Rozalla's Everybody's Free (to feel good) were released in the UK on 18th April.

2006 : Rozalla recorded a cover version of ABBA's song Dancing Queen. This song was featured in the movie "Full Circle". In April Rozalla gave her first performance in Zambia since the 80s. She recorded a 2006 version of her classic hit single Faith (In the Power of Love) and she is also working on a new song.

Everybody's Free was once again remixed, this time in Italy. Unlike most remixes, this new version was authorized by Rozalla who re-recorded the song for the Italian record label Loud Bit. The track was released in August on promo (as Kortezman Feat. Rozalla) and did well in clubs.

Are You Ready To Fly was remixed by Northernbeat and this new version appeared on the compilation Gayfest 2006.

2007 : she recorded a cover of the song Diamonds Are Forever for the compilation Forever Bond.

2010 : Rozalla was featured by Abel Ramos on a track called Where Is The Love (under With Love Music Records), released on 30th November

2011 : a set of remixes for Abel Ramos feat. Rozalla Where Is The Love (by Antoine Clamaran and Nicky Romero among others) was released on 15th February 2011. Everybody's free was covered by Damon Blaze ft.Vince.

2012 : Rozalla was featured by Pop Criminal on his EP single Reset.

Thanks to Florent, Abelito, Krasi, Hugues and Klems
Sundown - The Rozalla Site
CD Now
Thanks to Lucas for the latest infos

Listen to Rozalla on Radio Euro Classic, the eurodance radio