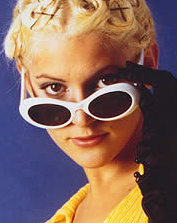 Jessica Jay was a project produced by Giuseppe, Lino and Rossana Nicolosi for S.A.I.F.A.M. Publishing Group.

According to her officiel biography, Jessica was born and raised in an upper middle class musical family in Europe. She's been interested in music and singing from early childhood. At the age of 17, she started singing in clubs in her area, with several bands. She perfected her vocal technique and began working as a vocalist for many recording studios, recording more than 100 songs. However, she never thought that one of them would become successful somewhere in Asia. After recording Broken Hearted Woman, she moved to Russia with her family and gave a priority to her study. "I still sang with my friends but recording a song was nowhere near possible". Right after graduation, Jessica Jay was back in music business : "I was so glad to be able to sing again, to be able to do what I love again after all these 6 years. And I don't think that the absence should bring about any problem". Jessica Jay loves to listen to all kind of music, especially funky, pop and jazz. Her favourite singers are Aretha Franklin, Anita Baker, Liza Minelli, Barbara Streisand, Natalie Cole and Al Jarreau. She also likes group such as Incognito, U2 and Tears for Fears.

Reality is a little bit more complex. Between 1995 and 1996, the vocalist of this project was Dora Carofiglio. She contributed to first album Broken Hearted Woman, a euro-reggae album. Only one single was released, other songs were only published on compilations. Emanuela Berti contributed to one song : Kiss And Say Goodbye

Second album Chilly Cha Cha - The Album featured an unknown Italian singer (often used by SAIFAM) and a British singer, who was also a background vocalist for The Spice Girls. Melody Castellari was said to have contributed to album My Heart Is Back.

First single Broken Hearted Woman became on of the biggest song of 1993, selling 1 million copies alone in Thailand and more than 500,000 copies in Asia. 30 local artists doing cover version of the song in Thai.

2007 : Jessica Jay was back with a new album called My Heart Is Back. Melody Castellari recently confirmed that she sung vocals on this album.

Thanks to Andrew-FK and Tavi Meran

Who is Jessica Jay ?