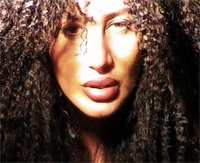 03/03/2014 : Sarah Grimaldi was featured by Majkol Jay on his single I Got Love, out today under Mahjong Music Limited.

Sara "Sarah" Grimaldi is a vocalist and songwriter (her voice is a light coloured soprano which extends on 4 octaves) born in La Spezia. As a little child, she started singing into church chorus and followed piano and dance lessons in her hometown. She studied at Liceo Linguistico and started to practice as a DJ when she was only 14. A few months later she started to collaborate with some regional radios as a speaker and to record advertising jingles. Meanwhile, she worked for a video-producing company in the section of filming and editing. She also appeared in some of these videos (of for instance KC & Sunshine Band, Pino Daniele, Gianni Morandi and many others Italian and international artists).

In 1994 she released a solo single called Did You Love Me under Reflex records under the name Sarah. The song was written by S. Tubelli, M. Franciosa and Sarah herself. It was arranged, recorded and mixed at "Nonsense Studio" in Genova (Italy) par Gianlorenzo Tubelli et Marco "Frank" Franciosa (also known as "Frank"), distributed by Reflex Records.

Afterwards, she became the chorus singer of some famous dance artists (such Jenny B, Tony di Bart, and Double You), but also contributed to the songwriting. But she also sung pop, blues, dance, house, trance and opera (she passed the opera conservatory examination, getting the first-class degree). Sarah also took part to gospel concerts with artists such as Leona Laviscount. She also wrote, composed and produced the single Valery Verga - Higher with Sergio Bonzanni.

In 1995, she was featured by Wild $ on the single Forever Love with Raluca V, and by the eurodance project Sinny, that she co-produced.

2004 : Sarah did vocals on Ice MC's new singles It's A Miracle and My World (with Michelle Weeks). She also contributed to all tracks of his new album.

In 2005, she co-produced and did vocals on Lovemakers' This Feeling. In 2006, she created the project Eyes Of Love with Federico Conti. Under the name Sarah Kay, she was also featured by Fish And Chips on the single Can't Get Enough. In 2006 too, she contributed to a welfare album to the Pakistan children's benefit, and also recorded a single to the benefit of an Italian association agains leukemia.

2008 : Sarah released a single entitled I Will Find You.

2017 : Sara was featured on Jerry Ropero's new single In Time.

She is also a vocal coach.