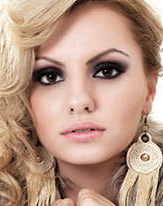 17/12/2019 : Alexandra Stan launched a welfare campaign to collect goods for poor people of Constanta, the place where she was born and raised.

24/05/2018 : Alexandra Stan was featured on Neversea, Manuel Riva's new single which is also the official anthem for this festival's 2018 edition taking place in Constata (Romania)

Romanian singer-songwriter Alexandra Ioanna Stan was born June 10th, 1989 in Constanța (Romania), on the Black Sea shore. From a very young age, she showed a special interest in music singing known melodies and even creating her own songs. She took one year of canto lessons, and she took part in various music-related contests, including Mamaia Festival 2009. She studied at the "Traian" High School in Constanța, then at the Faculty of Management Andrei Saguna

Her debut single, Lollipop (Param Pam Pam), sampling Fergalicious by Fergie, was released in 2009 and peaked at #18 in Romania. Video was shot in March 2010 at the MediaPro Studios nearby Bucharest, (Romania). During summer 2010, she presented a new track Show Me The Way, which was not released as a single, and toured Romania. Her second single Mr. Saxobeat, became her worldwide breakthrough hit, selling almost 1,000,000 copies in less than a year and reaching the top five in over twenty countries (#1 in Italy, Austria, Denmark, Switzerland, Slovakia, Hungary, Poland, Germany, #2 in Belgium, Czech Republic, Finland, Netherlands, Norway, #4 in New Zealand) and the top thirty in Australia, Canada and United States. Music video was shot in MediaPro Studios, Buftea (Romania) in October.

Alexandra Stan released her debut album Saxobeats in August 2011. The album spawned another single called Get Back (ASAP) with a vidoclip shop on December 6, 2011. Her 4th single 1,000,000 featured German rapper Carlprit.

2012 : Alexandra won a European Border Breakers Awards. She shot the videoclip of her forthcoming single in Mexico in April. Entitled Lemonade, it was out on June 4th. She started working on her new album and in September, her next single was entitled Cliché (Hush Hush) was out, with a video directed by Iulian Moga.

2013 : in May, Alexandra's new single (a collaboration with Manilla Maniacs) entitled All My People was released. In June 2013 she was hospitalized and concerts were cancelled. While her staff initially claimed she was involved in an accident, she revealed that her manager, Marcel Prodan, had beaten her and filed a criminal complaint against him. Her new album, initially planned for September 2013, was postponed.

2014 : after Thanks For Leaving, Cherry Pop, Dance and Give Me Your Everything, Alexandra Stan's new single was entitled Vanilla Chocolat, featuring hip hop and pop musician Connect-R

2015 : she released a duet with Inna entitled We Wanna and was featured by Dorian on song Motive. Her new single was called I Did It, Mama!.

2016 : in March, she released a duet with Mohombi entitled Balans. It was taken from new album Alesta. In May, another single was out. It was entitled Ecoute (meaning "listen" in French). Following month, she teamed with 3 other sexy Romanian singers : Inna, Loredana Ciobotaru and Antonia, to form project G Girls, and release single Call The Police. In September, Alexandra did vocals on Whitesound's new single Ciao. End of year, she revealed that her new single would be entitled 9 Lives.

2017 : in February, she covered Madonna's hit Like a Virgin and visited Alex Parker's single Synchronize. In May Alexandra was featured on Axel Muñíz single Siempre Tú. She released singles Boy Oh Boy in June and Noi 2 in August. In October, Alexandra appeared on Monoir's single Save The Night

2018 : in January, a 2k18 version of Alexandra's single Balans, with lyrics in French, was out. Alexandra Stan's new single Mami was released in February, from forthcoming album of the same name. She also did vocals on Manuel Riva's single Miami and on 8KO's single Ocean. At the 2018 Beirut International Awards Festival in Lebanon, she received a special prize for her career