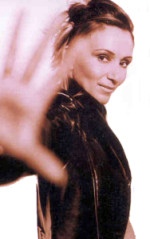 While she was still in school, the multi-talented Sagittarius with green-brown eyes went to practice every afternoon in order to complete her musical training. This training included ballet, jazz and tap dance, acting and singing. At the age of twelve, she managed to be one of two dancers to be chosen from a field of 2000 candidates for the ballet school of the Heinz-Bosl-Stiftung(foundation).

A lot of hard work, discipline and ambition helped her at the age of 16 to be picked from among 300 candidates for a role in the Elvis Presley musical in Munich. The "Elvis" musical was something really special for Nancy. She went to the auditionings in secret, because otherwise there would have been trouble at home, as she simply didn't attend her professional training. She had made it through the first auditioning and was called in for the second one, which was "not only" for dancing roles. It was a combination of dancing, acting and singing and that was just what Nancy liked. When she was offered several roles after the second auditioning, she felt like walking on air, because she had done it.

After the Elvis musical Nancy had quite some downs financially, to be honest she had a real tough time. She was very happy when she got an offer to take part as a dancer in a new year's show. It was a show celebrating different times and years, a kind of "history show"taking place in a theatre in Munich. At this time Nancy had so many plans to learn all the different dancestyles, which she did and she spent all her money on danceclasses. But if her mum wouldn`t have helped to pay for them, she probably would have never made it. Her mum stood behind her at all times and helped her even in these hard times. Sometimes Nancy got "extras" (minor roles in films) and even for appearances like this she was very happy to receive 25 euro at the end of the day.

In 1990-1993 she used to dance in a TV-ballet named the Preston Phillips dancers. She appeared on many TV-shows, such as "Baden Badener Roulette", "RSH Gold", "The Golden Europe Awards", in Germany, Austria, and Switzerland. This TV-ballet company became more and more successful and Nancy had a lot of fun dancing for them. The rehearsals for one TV-show took about 10-14 days and when you ask her today, what she remembers most of the rehearsals, she says : "The one by one dancing. That was horrible, when you had to dance a choreographie of 4 minutes on your own in front of everybody".

At the same time Nancy got her first offers for some fashion shows. From 1990-1995 she took part in more than 700 fashionshows. Often she only came home to unpack and pack her luggage, because from 1988-1994 she was living most of her time in London. Her journey took her from one country to the other and from one fashion-exhibition to the other.

In 1993, Nancy gathered first experience in the field of pop music as background singer and dancer for Haddaway. She was a female vocalist for the projects 3-O-Matic, 2 For Good and Enflame then she joined DJ Bobo's team. She married DJ Bobo.

In 2003 she gave birth to her first son Jamiro.

2006 : Nancy is pregnant again. In August, she did a photoshoot during her latest months of pregnancy for a breast cancer prevention cancer.