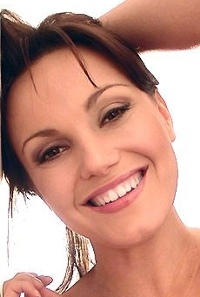 19/03/2019 : Neja's new single I'm Calling You is available on Sportify. It will be released on other platforms next March 30th

05/02/2019 : Neja announced that I'm Calling You, a song she recorded with Massimo Zanotti, would be featured on an ad for Batara broadcasted during Sanremo Song Festival 2019 tonight, and probably released next April.

02/05/2018 : Neja will release a 2018 remixes package for her hit Restless. One of the remixes was selected after a remixers contest.

Despite the exotic name Neja, Agnese Cacciola was born 15th August 1972, in Turin under the Leo Zodiac sign. Her musical past is a long road of Jazz, Gospel and Celtic but she arises to success thanks to Dance Music.

Songs like Restless and Shock can surely be defined Super Hits and in only one year have made Neja one of the most famous and danced artist not only in Italy but also Europe riding the top of both the sales and the Dance charts. Neja's highlight as an artist is due to the single The Game (also the title of her debut album), with which she wins the 1999 "Disco per L'estate" and makes her present in every Festivalbar '99 show.

Due to the amazing 1998 and 1999 results abroad of Neja the New Music International believes that Neja is ready for a musical carrier wider than what the Dance had offed till then and this is how an album where the artist can show her talent 360° wide was born. Neja, author of the 10 tracks included in the album, from the Dance beats of Restless and Shock, easily slides from pop dance tracks like The Game all the way to pure pop like Fairytale or Mum's Day.

The entire album, extremely present in the Italian and Foreign market, lyrically touched the artist's relationship with love, hope, her parents and God. It also contains a CD-ROM that includes an interview, photos and the video clips that support her hits.

In late January, occasionally, Neja along with her producer Alex Bagnoli put together a dance mix of Fairytale that immediately smashes through the radio and sales net thanks to the powerful combination of the latin and dance flavour that rides the musical european trends. One more summer and Neja strikes again. This time the new hit annouces the second upcoming album and the single for this summer 2000 is Singing Nanana. A latin based track published in different versions: a Dance mix, Club mix, the Original and the Cuban cut, recorded totally live with bongos and trumpets.

2005 : Neja released a new single called Who's Gonna Be, not exactly eurodance unfortunately. From 2003 to 2005, Neja performed for her devoted fans in Italy and other parts of Europe, as well as in India as a representative of an Italian clothing company

2007 : She started working with producer Ivan Russo, who scored a smash hit with Ilona Mitrecey. In April, the online release of a remix of the famous Madonna tune Like A Prayer was planned. This project started from the idea of the French DJ Benjamin Braxston.

Her new single Catwalk had some success in Italy and France.

2008 : Neja's new album Acousticlub was released on 30th May. It included 8 covers chosen among the songs that she used to like when she was a teenager, plus The game and Destiny. All songs were rearranged in a jazzy style, which should not really please all dance fans... The first single is Sweet Dreams, cover of the famous Eurythmics hit.

From June 23rd and during all Summer, Neja will be co-presenting a new radio show called Estatissima.

2009 : Neja's new single is entitled Loving You. The album has been produced in cooperation with two DJs from Turin (Peter Damir and Gianluca Argante - production) and it is currently being promoted in England.

Listen to Neja on Radio Euro Classic, the eurodance radio