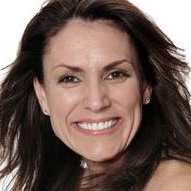 American filmmaker, singer-songwriter, model and TV personality Nancy Sexton was born July 8, 1969 in Ragersville, Ohio. The youngest of five children, she grew up in a small Amish community in farm country, where she worked as a farm hand bailing hay and milking cows, then at a local factory, and restaurant. She then did her studies in the University of Akron on a full ride basketball scholarship, where she also started her modelling career. Then she moved to NYC where she managed restaurants, worked as a bartender, a waitress, a model and finally began singing with her own band.

She moved to Italy to walk the runways, but soon this became a full-time singing career. God Only Knows was released as Nancy S under label Mystery Records. Lyrics were written by Antonio Summa and R. Bonizzoni, the single was produced by Antonio Summa & Roby Benvenuto. The same year she released a solo single under her complete name, entitled I'm Some Some.

In 1997, she did vocals on Molella and Phil Jay's single It's A Real World which reached #1 on the Italian Hit Parade, and led her to perform in Festivalbar.

1999 saw her taking part to project E-Magic as vocalist and songwriter. Founders were Nick Ferrando, Rossano Prini and Stefano Marcato. 3 singles were released.

Then she returned home to NYC and began her acting, and writing career. She was the voice of many television and radio spots, including Fox radio spots for Thursday's and Wednesdays.

Nancy also had successful fitness businesses in NYC and Los Angeles and in 2005, she was the star of FitTv's, "The Gym", and Travel Channel's "Ship Out Shape Up". She wrote the 14 day "Fresh 14" program, and launched a line of goal inspired jewelry called "Goalery".

2009 : thanks to her work in stunts and her martial arts background, Nancy played a role in Discovery's "The Colony". She also began writing and directing many television commercials for area businesses.

2011 : she co-authored with Alon Bar the book "Write Your Film", a screenwriting manual exploring the two unique writing system and collaboration.

2013 : she played in the movies Minotaur and Schooled.

2017 : with Alon Bar she wrote screenplay "Scriptapalooza" and the animation feature "Ruby".

Thanks to Marian Stoica, Andrew-FK
Nancy Sexton on imDb