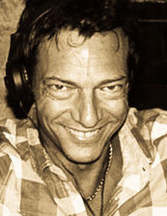 13/06/2015 : New from Molella, a collaboration with Airtones entitled Bring Back The Love.

31/12/2012 : Molella recently released the videoclip for his current single Even In The Rain.

It all started out when, afew years ago, Mario Fargetta asked Maurizio to replace him as DJ in the disco New Feeling. He had so much success that he was asked to go back that same evening too. Before this, Molly had practised during 5 years on a small semi-professional mixer, starting at the age of 14, mixing tapes for friends. A year later he was at the microphone of a small local radio station, Muggiò's Radio Country. Afterwards he worked at Radio Nord, Milano 22, Superantenna, and Retecittà. In the meantime, he obtained a diploma as designer and mechanical engineer at the Tecnico Industriale Institute.

In 1986, Maurizio Molella was asked to become a director of Radio Deejay. On the other side of the window was Amadeus. After about a month, his first Mega Mix arrived, broadcasted on a Sunday afternoon from 1 to 5 PM. A year later, he started collaborating with Jovanotti, giving his first TV shows on Italia Uno (Jovanotti). Then he went on tour.

Afterwards he started a carreer of producer : he stood behind Gala and the Outhere Brothers (I You Wanna Party). He also remixed for Vasco Rossi JT Company, Aqua and Boy George. He also released many solo singles : starting with Revolution, which was #1 in Italy, to his last singles Genik and Discotek People which came out on Do It Yourself's Liquid Sound label. Some of them were a few eurodance singles : among them, Changes and See The Difference (featuring the rapper of Antares).

In 2001 DJ Maurizio Molella succeeded in the difficult task of remaining constantly in the sales charts, alternating between his roles of artist (for the singles Genik, Discotek People, and Love Lasts Forever), and remixer for Ti Prendo E Ti Porto Via by Vasco Rossi. He won an Italian Dance Award which was handed over to him personally by Vasco himself. And 6 years on from his last album Originale Musicale Radicale came his second album entitled Les Jeux Sont Faits. The first track extracted from this album, Love Lasts Forever, reached position #1 in all the dance music charts. Whistle's Party featured the voice as “Discotek People” (MC Nardo). Farilalililla and Can U Feel were two tracks which sounded distinctively European.

On the 27th May 2002, the new single titled TVAB was released. Following the same successfull style of Love Lasts Forever, the track took a run-up to jump at the top of all the dance charts. In September 2002, the follow up entitled Magia, was a great surprise in store... Molly decided to use in this record the famous riff from Come Into My Life by Gala. The record was published on Liquid Sound label, available both on vinyl and CD. The vinyl contained 2 versions of Magia on side A and, on side B, a wonderful remix of TVAB. On CD-single one could find 2 versions of Magia, and 2 versions of TVAB.

In 2003, Molella came back again with a concentrate of pop, electronic with "old" contaminations (60's) with the title Baby!. This new single by the "Dance producer 2002" (how he was awared at FIMI award and Italian music awards) and testimonial for the Do.Re.Mix (distributed by Magix) software, saw the contribuition of Mauro Conti and Davide Medici as co-producers, co-authors, and... singers.

2006 : In July, Molella released a single called From Space To My Life containing the chorus of Gala's former hit Come Into My Life, sung by a new vocalist, as he had already done on the single Magia.

In November, Molella's new single was released. Love Resurrection (a cover of an old hit) was available only from legal download portals. The style reminded of Bob Sinclar's Love Generation.

2012 : Molella and Sergio Mauri featured Coco Star (former Fragma vocalist) on their current single In Your Eyes. Next Molella single was entitled Even In The Rain

2013 : with Rudeejay & Matteo Sala he released the single Everything, featuring H-Boogie

Listen to Molella on Radio Euro Classic, the eurodance radio