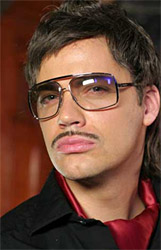 Gunther And The Sunshine Girls   (Sweden)

09/04/2017 : Günther And The Sunshine Girls's next single will be entitled Dynamite and it will feature Blizz Bugaddi. Release was postponed to next week in respect to victims of Stockholm's truck attack.

12/01/2017 : Günther And The Sunshine Girls teamed with singer D'Sanz to release a new single entitled Love Yourself to represent Finland for Eurovosion Song Contest 2017. Song will compete on January 28th at Uuden Musiikin Kilpailu 2017, the Finnish preselections.

24/06/2016 : Discover Günther and the Sunshine Girls's videoclip for their current single No Pantalones.

04/06/2016 : Günther And The Sunshine Girls are back with a new single entitled No Pantalones, which will be out on June 10th.

21/11/2014 : Günther & The Sunshine Girls announced that a new release was planned for January.

Gunther And The Sunshine Girls albums

Gunther And The Sunshine Girls singles

Gunther And The Sunshine Girls biography

Behind the name "Günther" stands Mats Söderlund. Günther is a parody of the 80's style and especially the German 80's. Günther sings in English with a German accent. He wears a moustache, hair style of the 80's and nasty sunglasses. In the video to Ding Dong Song he's tempting after the choir girls (The Sunshine Girls, a duet of sexy singers, among them Johanna Elkesdotter aka Johanna Stedt) and is singing with an excessively dark and erotical voice things like "Oh, you touch my Tralala". Produced by Anderz Wrethov, Ding Dong Song was an unbacked big hit and took the first place on Swedish singles chart. It also had some success abroad, reached #12 in Ireland and #7 in Norway.

In the begining of May 2004 the next song was released Teeny Weeny String Bikini, which already went #7.

According to Mats Söderlund, Günther is 29 years old and a bachelor. Mats himself is seven years older, married and has two children. Born in Malmö (Sweden), Söderlund is known as a well known club owner and party fixer in Malmö and has worked internationally as a photographer's model. He also worked part-time in a clothing store. Günther and the Sunshine Girls were managed by former Warner Music A&R agent Henrik Uhlman, and were represented in the United States by prominent entertainment agent Mayar Zokaei.

For his third single, Günther released his version Touch me!, featuring original singer, famous Samantha Fox. He turned right in to #19 on the first week of the hit list "Tracks" in Swedish channel SR P3 in December. In French engineers schools parties, he had a lot of success.

2005 : Günther's new single was entitled Tutti Frutti Summerlove. It entered the Finnish charts directly at #12. At the end of the year, their new single Christmas Song was released. Video was censored by the Swedish television.

2006 : Günther & The Sunshine Girls competed in March to be selected to represent Sweden at the Eurovision contest. Unfortunately they did not make it to the final.

At the end of the year, Gunther entered the studios to work on a new album. 2 brand new tracks can already be discovered : Obsession and My Boudoir. One of them is maybe the forthcoming single.

2007 : a track called Ding Dong Song Philosophy vs Tom Snare was released. The new single Suntrip did quite well in the Swedish charts. It was produced as usual by Anderz Wrethov. For once, vocalists Jenny Olsson, Johanna Stedt and Sara Svensson were credited

2008 : The teaser of a new Gunther and the Sunshine Girls song called Pussycat, a very nice dance song, could be heard on his official website and Günther announced he was working on a new album with the working title Dirty Man Swedish Sex Beast, but finally, apart a videoclip for Pussycat, nothing was released.

2010 : Günther was back with a new single entitled Famous.

2013 : Günther's new single was called I'm Not Justin Bieber, Bitch. It was her first single to be released without the Sunshine Girls

2017 : Günther and singer D'Sanz recorded song Love Yourself to represent Finland for Eurovosion Song Contest 2017, but they ended #5 and were not selected. Next single was a collaboration with Blizz Bugaddi entitled Dynamite.


Links to Gunther And The Sunshine Girls

Complete your Gunther And The Sunshine Girls collection


More about Gunther And The Sunshine Girls