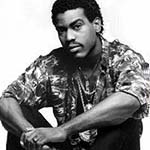 As the first commercially successful rap artist, Kurtis Blow is a towering figure in hip-hop history. Popular and charismatic, he was the first rapper to sign with (and release an album for) a major label; the first to have a single certified gold (1980's landmark The Breaks); the first to embark on a national (and international) concert tour; and the first to cement rap's mainstream marketability by signing an endorsement deal. For that matter, he was really the first significant solo rapper on record. For all his immense importance and influence, many of Blow's records haven't dated all that well.

Kurtis Blow was born Kurtis Walker in Harlem in 1959. He began to immerse himself in the newborn hip-hop culture in the early '70s : breakdance, block-party and club DJ performing (as Kool DJ Kurt)... After enrolling at City College of New York in 1976, he also served as program director for the college radio station. He became an MC in his own right around 1977, and changed his name to Kurtis Blow (as in a body blow) at the suggestion of his manager, future Def Jam founder and rap mogul Russell Simmons. Blow performed with legendary DJs like Grandmaster Flash, and for a time his regular DJ was Simmons' teenage brother Joseph or Joey (who, after changing his stage name from "Son of Kurtis Blow," would later become the first half of Run-D.M.C). Over 1977-1978, Blow's club gigs around Harlem and the Bronx made him an underground sensation, and Billboard magazine writer Robert Ford approached Simmons about making a record. Blow recorded a single co-written by Rocky Ford and J.B. Moore called Christmas Rappin'. It was a hit and it helped him get a contract with Mercury.

Blow's second single, The Breaks, was an out-of-the-box smash, entering the Top Five of the R&B charts in 1980 and eventually going gold. It is still considered as one of old school rap's greatest and most enduring moments. The full-length album Kurtis Blow was also released in 1980, and made the R&B Top Ten in spite of many assumptions that the Sugarhill Gang's success was a one-time fluke. Although the album's attempts at soul crooning and rock covers haven't dated well, the poverty-themed Hard Times marked perhaps the first instance of hip-hop's social consciousness, and was later covered by Run-D.M.C. Blow initially found it hard to follow up The Breaks, despite releasing nearly an album a year for most of the '80s. 1981's Deuce and 1982's Tough weren't huge sellers, and 1983's Party Time EP brought D.C. go-go funksters E.U. on board for a stylistic update. However, things picked up in 1984 with the release of the Ego Trip album, which featured the single Basketball. Around this time, Blow was also making his mark as a producer, working with a variety of hip-hop and R&B artists. Ego Trip sold respectably well on the strength of cuts like the DJ tribute AJ Scratch and the Run-D.M.C. duet 8 Million Stories. Blow followed it with an appearance in the cult hip-hop film Krush Groove, in which he performed If I Ruled the World, his biggest hit since The Breaks.

If I Ruled the World proved to be the last gasp of Blow's popularity, as hip-hop's rapid growth made his style seem increasingly outdated. 1985's America was largely ignored, and 1986's Kingdom Blow was afforded an icy reception despite producing a final chart hit, I'm Chillin'. Critics savaged his final comeback attempt, 1988's Back by Popular Demand, almost invariably pointing out that the title, at that point, was not true. In its wake, Blow gave up the ghost of his recording career, but found other ways to keep the spirit of the old school alive. He appeared in commercials for Sprite in 1986. In the early '90s, he contributed rap material to the TV soap opera One Life to Live, and later spent several years hosting an old-school hip-hop show on Los Angeles radio station Power 106.

During the 90s, he was rapper for many eurodance projects : he appeared in Power Nation - Calling You, Sonic Boom - I Want Some Holiday and Open Your Mind Techno Cop - Axel F (1994 remix), 4 N.F. - I Wanna Be Your Love, Silent Running - Follow Me.

In 1997, Rhino Records took advantage of his status as a hip-hop elder statesmen by hiring him to produce, compile, and write liner notes for the three-volume series Kurtis Blow Presents the History of Rap. The same year, he was a significant presence in the rap documentary Rhyme and Reason. Blow's music has also been revived by younger artists seeking to pay tribute; Nas covered If I Rule the World on 1996's It Was Written, and R&B group Next sampled Christmas Rappin' for their 1998 smash Too Close.

2006 : Kurtis Blow is an active member of the Hip Hop Church concept, already nominated for two 2006 Tiffany Gospel Awards. Their mission is to present the Christian gospel in a setting that appeals to both those individuals who are confessed Christians as well as those who are considered unchurched...

Thanks to Necronomic
Steve Huey, All Music Guide
Kurtis Blow at Discogs