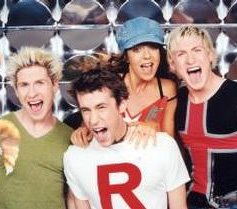 German project Normal Generation? started in 1995. At first, it was a boys trio made of Simon Veigel (piano, guitar, harmonica, raps), Stefan "Steve" Waidelich (piano, vocals, songwriting) and his brother Marcus Waidelich (vocals, raps, dancer). All of them were born in born in 1980. Soon, they were joined by female vocalist Rebecca Gamer. Their first releases were eurodance, then they turned to a more Christian pop sound. Their lyrics were very religious-oriented and they describe themselves as an "evangelistic band" who try to be "faithful ambassadors of a Christianity that is alive, well and accessible". They were considered as Germany's most successful Christian band.

The trio did their first live performance during Teenietag in 1995, and according to the legend, they found their band name the same day. In 1996, they were joined by Rebecca and got signed unde records company Pila Music. First self-titled album was followed by a big tour in Germany as well as some festival gigs in Switzerland and the Netherlands.

In 1998, second album Normal Generation? II was released under Alliance Music. They launched her own festival, called More of God Camp, targeting Christian teenagers. Including live appearances, singing and dance workshops, forums, full of worship and religious messages, MoG indoctrination camps were successful enough to be continued the next years.

In 2000 they launched their third album Outsiders, which was more pop than eurodance, with even a few rock influences. Afterwards, they changed label again, signing a record deal with Dieter Falk's label Stereo Wonderland.

2001 : they were massively promoted in Germany by Evangelical Church with the action "God in the charts". Their new single Long For You could even be found in religious music stores.

In an interview, Simon explained the reasons of their musical change : "It wasn't a decision we made consciously, but rather came about naturally as we were in the process of producing an album that corresponded more to our own musical tastes and influences. The first two albums were much more dance-orientated, which was fine for a time and certainly established Normal Generation? in the European Christian music scene, but as the band has developed so have our musical priorities. The dance focus was more Steve's influence than anything else, but I'm much more of a Lenny Kravitz fan, so the new album was really liberating for me. Cross Rhythms described 'Outsiders' as a pick and mix CD, which is true to an extent, although our main goal with the album was to combine dance and rock influences and I think these can be found in most of the songs. As always when recording the album we were striving to produce something that would come over well live. You'll find songs that perhaps only really hit home when you see them done live."

2002 : they took part in the German national final of the 2002 Eurovision Song Contest with gospel-pop ballad Hold On and ended #3. They released their 4th album VIP.

2003 : their fifth album was entitled Freedom under again a new records company : J-Star

2004 : they did a creative pause. They contributed to organisation to More of God Days festival in Stuttgart.

2007 : they announced that a new album was planned.

2008 : new album More of God was presented. It was a collaboration with other musicians and produced by Derek von Krogh. It is no known wether it was released or not.