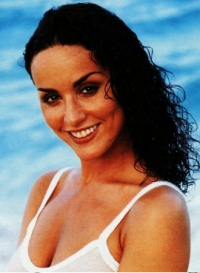 27/01/2016 : Former 2 Fabiola frontlady Zohra Ait-Fath nowadays works, not only as a DJane, but also as artistic manager of the Otentic Perfumes brand.

Zorah (real name : Aït-Fath Zohra) was born on the 8th of September 1975. She talks Dutch very well, but her mother tongue is French and she's Turkish. Her look is very defiant, that makes her and 2 Fabiola irresistible. She's keen on different sort of kicks : benji, parachute... Her biggest dream is to subscribe for an astronaut course. "It has to be breathtaking to fly as an Earth representative to other galaxies and to search for other intelligent life among the stars ...", Zohra says. "I've always been a dare-devil. When I was a child, I wasn't interessed in dolls. I went to the woods with my brother and we climbed in the trees. My brother has teached me how to climb a tree, but because I wanted to prove myself, I always tried to do it better than him, in which I succeeded. Now, I don't know anymore what 'fear' is. I also love a 'weird atmosphere': 2 years ago, I went with a couple of friends to a village in the mountains in Switzerland. One night, at midnight, we dressed like monsters, and we went to the cemetery, where we danced around between the graves... That gave me an enormous kick. Someone even took pictures of it, but none of them could be developed: as if a ghost had cursed the film."

Zohra left 2 Fabiola in 1999 and was replaced by Medusa (Evy Goffin, who would later become Lasgo's vocalist). She released five solo singles between 1998 and 2000.

In October 2001 Zohra created the project Punk City (together with producer Kris Vanderheyden behind the scenes) and her first single is the The Mission.

2002 : she played the role of Maggy Lejeune in the teen TV-soap Spring on Ketnet during 2 seasons.

Then, Zohra concentrated on her DJ carreer, she became quite well-known in Belgium, which is quite remarkable in a domain mailny dominated by men.

In 2004, she did sets with Tom Barman and C. J. Bolland for their Magnus-project. The same year, she released her first book, entitled Zohra en de gazellen, a collection of Arab tales which received very positive critics.

2006 : Zohra was in Morooco for the Sultans of surf, surfin' the waves at day and the decks at night. She took part to the show Let's dance on the channel VT4. She also played the role of a lawyer in the series Witte Raven BV on the TV channel Een.

2007 : from May 30th till June 6th 2007, Zohra was on two different shows: Koffer en Co and Memo, on Radio 2. She is also Red Bull Formula Una Ladies ambassador. And in November, she took part to a series of welfare concerts against poverty. She also regularly appears in the TV program De Rechters.

2009 : she contributed to a charity rally "LDC 2009" to support the foundation Een Hart Voor Limburg.

Thanks to Denis "DJ Hooligan" Zhabkine and Apho

Listen to Zohra on Radio Euro Classic, the eurodance radio