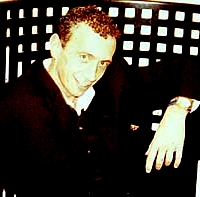 16/09/2020 : Next Savage single will be out on September 25th as red vinyl and will be entitled Lonely Night

26/01/2020 : Discover the videoclip for Savage's new single I Love You, from the forthcoming album Love and Rain

Roberto Zanetti was born in Massa on November 28th 1956. At 14 he started to study the piano and soon fell in love with music - realizing that it was to be the focal point of his future career. Roberto played with musical groups during his days at high school before going on to University. The work with various groups became so important that Roberto decided to undertake a musical career, and put together a professional group, Taxi, in which Zucchero 'Sugar' Fornaciari was on guitar.

This was the period when Roberto started composing songs, at first in a melodic and commercial style and then in dance style. In 1983 he made the first single for his group Taxi, entitled To Miami. The record became a local success (it was released only in central Italy) and it paved the way for another piece: Angelica by Joey Moon.

After these first experiences, Roberto was contacted by two DJs and, together with them, he produced Incantation by Gang. This record, a cover of a Mike Oldfield song, worked out well in Italy and it was the beginning of a collaboration with Discomagic, which distributed it and was to become Robertos partner in the future.

In October-November 1983, Roberto produced 4 other records: Buenas Noches by Kamillo, Starman by Claudio Mingardi, Magic Carillon by Rose and, finally, his turning point: the song Dont Cry Tonight by Savage. This was Robertos first, real, great success and, in the meantime, he decided to call himself Robyx, using the name as a producer. This professional name originated at school, when Roberto used to draw strip cartoons together with a friend, Fabrizio Bonini. One of the characters, a rich and famous rock star, was called Robyx. in the following years (1984-1986),

Roberto dedicated himself to the Savage project, successfully recording the album Tonight and some singles (Only You, Celebrate, Radio, A Love Again, Love Is Death, Loosing You, Goodbye). In this period, the only production (apart from Savages records) was Live Is Life by Stargo. This song is a dance cover of a famous one by Opus and, in Robertos version, it reached the top of the French charts, winning a gold record for 250.000 copies sold. As he was the performer in the Savage project, singing all the songs, Roberto concentrated his work on shows and tours throughout Europe, becoming a star in some countries of Eastern Europe, such as Poland and Russia.

At the end of 1986, Roberto decided to create his own recording studio (Casablanca Recordings), where he also had the headquarters of his production company, named Robyx. Its important to remember that all the previous records had been made in an Italian studio: Scaccomatto, in Lavagna. Roberto started his career as a self-taught producer. As a keyboard player, he quickly learnt how to utilize computers and digital equipment that, shortly afterwards, was to be the base of dance music. One of the most meaningful stages of his technological progress was marked by being one of the first to use linn drums, in 1984, and Yamaha DX7 (1984) and Roland MC 700/500 computers (1985).

Among the first projects undertaken in the new recording studio, the House Demenziale phenomenon is remarkable. This was a period of transition in the world of music. The first house started to cause a big sensation in the UK and in America, but it had not yet reached Italy. Roberto noted the song The Party by the group Craze and decided to make a cover in the italian language using witty lyrics. In this way the record Non Toccarmi Il Culo Dai was born, and was immediately imitated by Salvi with Ce Da Spostare Una Macchina. In just a few months Roberto released about 10 records of that genre, with great success, selling 200.000 copies of singles, a huge number for the italian market!

In 1988 Robyx started a new project, that was to become a great international success : Ice MC . The origin of this project is curious, to put it mildly : Roberto composed a song for himself and then sang it. Subsequently, he decided to eliminate the lyrics of the verse and replace them with rap. To do this, he invited Ian Campbell, a british boy of jamaican origin, as a rapper. Ian had been working as a disco dancer until then. In that way Easy was made, becoming a big hit all over Europe. Even though he sang all the vocal parts, apart from rap, Roberto decided to not actively appear in the group, and so the group was called Ice MC. Also the following singles, Scream and Cinema, became big hits as well as the album in which they were included.

Ice MC was in great demand all over the world and tours began. So, while Ian travelled, doing shows and promoting his image, Roberto took care of the organization and the composing of records. Robyx put all his energy into the Ice MC project, since he felt it his own. Around 1990, Robyx produced few records, apart from those of Ice MC. The most  significant are: Pianonegro by PIanonegro, Party Children by Wareband feat. Tad Robinson, vocalize by Scattt.

In 1990 Robyx met Double You by chance, and a fruitful collaboration began. It led to the single Please Dont Go. Also on this occasion, Robertos intuition proved right when he launched a style, covermania, later followed by many others in Europe. Following its release, Please Dont Go became an instant hit, being one of those songs that climbs charts without the help of any particular promotion. In England the piece was noted by a dance label, known as Network, that applied for the licence to release it in the UK. Robyx answer was negative, because the song had already been licenced to another company in that country, so network unashamedly decided to copy Please Dont Go. The copy was sung by the english group KWS, and it reached the top of the English charts, also thanks to the distributors incorrect behaviour (he was the distributor for both the Double You and the KWS versions, supporting only the latter). Later on, DWA won a legal case against Network, who were ordered to pay damages. These proved impossible to assess, considering KWSs success in both the UK and USA. However, Double You triumphed in the rest of the world and, after that, Robyx produced other big successes, whereas the group KWS and the dance label Network disappeared from the market.

Also KC, the composer of Please Dont Go, was interested in Robyx and he visited Italy to record an album, produced by Robyx. Between 1992-93 Roberto moved to a new headquarters and, with his new studio, he inaugurated an unending series of successes, such as those by Ice MC and Corona. It was in the new studio that the unique sound DWA was created, setting the example to be followed in the recording world in the following years.

The first hit was The Rhythm Of The Night by Corona. In this piece Robyx confined himself to giving some suggestions to the producer Francesco Bontempi, and it was only from the second single (Baby Baby) onwards that Roberto became a very important part of the project, making mixes and cooperating actively in the creation of all the songs. With other new records by Ice MC, Think About The Way and Its A Rainy Day, Roberto worked on finding new sounds. The famous sounds of the kick drum and the movement of bass, that were to characterize Eurodance, were used for the first time in these songs. In a few years, Robyx saw himself catapulted among the most important producers, selling more than six million singles and two million albums all over the world, with Ice MC and Corona.

At the end of 1995, Robyx decided to reorganize his activity, starting the construction of new more functional offices and reorganizing his artistic staff. It was in this period that there was conflict with Ian, who had signed an agreement with a different manager, ignoring the contract with Robyx, which was still valid, and saying that he wanted to change his style. The disagreement arose, also because Ian wanted to use the name Ice MC which is a registered trademark of Robyxs company, Roberto having been the singer of the project for a long time, as well as being the composer of all the songs and playing all the instruments on all the records. Ian signed an agreement with German Polydor and so Roberto was forced to break off all relations with both the artist (who continued to use the name Ice MC without rights) and with Polydor. Later, Polydor released a new record that, without Robyxs production, was a big flop, bringing such an important project to its end.

In 1996 Robyx produced only two singles by Alexia , the vocalist of Ice MCs greatest hits. Also this time, success was assured and the singer embarked upon a successful solo career that took shape in spring 1997, when her first album was released. In the meantime, the new studios were ready and Robyx moved there, to start on new projects, to be released in spring 97.

Following a period of no releases, DWA Records started to produce new material in 2004 (Ice MC’s It’s A Miracle ) and in 2005 (Creavibe’s Wonderful Life).

2009 : producer Roberto Zanetti aka Robyx finally decided to bring out his project Savage. In June, a video was shot in Los Angeles for the newest single Twothousandnine, to be released this month. He also produced Eliza G's debut single Summer Lie.

DWA Records
Thanks to Marian Stoica