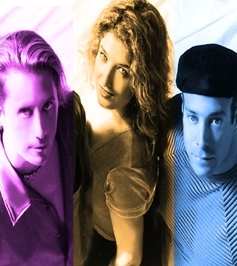 YBZ is the result of a fusion between The Yakoo Boyz and the singer/songwriter Cleo-Patra.

The first release from The Yakoo Boyz, Pipe Dreamz, entered at #5 on the singles chart in The Record in 1995. It went on to reach #16 in The Record's national chart for top selling Canadian singles from 1975-1995. For the singles which followed, the creative team of The Yakoo Boys, consisting of Brad Ferringo and John Grenn, used various female vocalists to record their songs. These songs went on to appear on numerous dance compilations with much success. Working towards a full-length album they decided to find a permanent vocalist to join the group. And so the search began … As for Cleo-Patra, she was native of Windsor, Ontario. Her first job in the big city of Toronto back in 1994 was recording the soundtrack to a movie biography on Madonna's life. Since then, she had released 4 singles under the Hi-Bias label, with a video for her first single Keep On Spinnin' DJ. With her own studio to work in, Cleo-Patra expanded her own library of songs, all the while developing further her songwriting and programming skills. Continuously searching for new ventures, Cleo-Patra was eager to collaborate with someone new to expand her musical horizon.

In the summer of 1997, both The Yakoo Boys and Cleo-Patra were on the same bill for one of the biggest concerts of the summer, bringing together some of the best dance artists from all over the world at the Molson Amphitheater for one massive eight hour show. After they met and had a chance to get to know a little more about each other's careers, they soon realized that they had similar tastes in music and similar goals for their own careers. Their collaborating began. With each of the member's individual strengths, talents and experience, they combined for form a strong unit known as YBZ. The first release from this new venture was the single Now That I Found You, followed by Love Is Calling, with a full-length album currently in the works.

Listen to YBZ on Radio Euro Classic, the eurodance radio