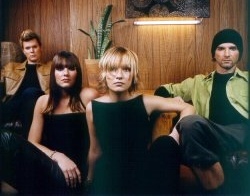 22/11/2015 : Waldo's People is currently doing a large 20 Years celebration tour in Finland, with Waldo himself and singer Karoliina Kallio (or featuring Elin Aninia Electriic) (thanks to Sami Kapanen)

28/07/2009 : Waldo's People's new single is entitled New Vibration. It is #4 in the Finnish charts this week. Discover it here. They are currenty on their summer tour in Finland.

08/05/2009 : In an interview given to ESCToday, Waldo's People told they were very impressed with the stage and that they planned to use every centimetre of it, since they have, as they call it, "fire choreography". They also want to show to the audience that rock and ballads are not the only things Finland can offer to Europe. They expect a huge support from the fans and see the ESC as a perfect place for launching a successful international career. Eurodance fans, you know what you have to do...

02/04/2009 : Waldo's People's single Lose Control is #1 in the national sales chart this week, after 15 weeks of presence. The band is touring all over Finland and getting ready for the Eurovision Song Contest.

U Drive Me Crazy, with Nirvana's famous guitar riff, was the first video from Waldo's People. It was the first Finnish video included in MTV Nordic's daily video-rotation. It was second in Nordic Top 5. U Drive Me Crazy video was also often played on ZTV the Swedish youth channel. The track was number one in Finnish Dance Chart and did great also in Swedish Dance Chart.

The band's first album, simply entitled Waldo's People had a lot of success in Finnish official album chart (it was among the best ten). Afterwards the album was released abroad.

I Dream was released in late 1998, produced by La Cream and with the male vocals performed by Charlie King.

The biggest success Waldo has gained by his solo career in Rumania in where he was performing as the leading artist in Golden Stag festivals with e.g. Diana Ross and Status Quo. Waldo admits his success in Rumania, but doesn't want to compare his success in Rumania and Finland. He also refuses to be considered as the headman of the project.

2008 : Waldo's People are back ! Their new single is entitled Back Again. Apart from Waldo, of course, the team includes vocalist Karoliina Kallio as well as the musicians Sami Lehto, Karl Sinkkonen, and Kimmo Nissinen.

2009 : they will be representing Finland at ESC 2009 with their song Lose control. In April, it went #1 in the national sales chart. The band is touring all over Finland.