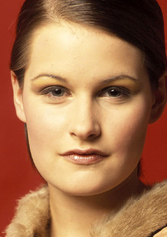 25/05/2018 : Groove Coverage vocalist Verena was featured by Deeplow on single Sun & Sky. (Thanks to Tavi Meran)

Singer and songwriter Verena Carmen Rehm was born May 14th 1984 in Neuburg, Bavaria (Germany). She is the backing vocalist and pianist of Groove Coverage. She has many song writing credits both within and outside the group and also sings for many other German dance acts.

After attending kindergarten, Verena discovered her passion for music. In her autobiography on the Suprime Records website, Verena states that her interest began with her father's old piano, which lead her to begin piano lessons. At the age of 14, Verena joined the cover band Querbeet, spending 4 years with them as their lead singer and keyboardist.

At the age of 18 Verena was approached by Axel Konrad and Ole Wierk (aka DJ Valium), who asked her to join the team at Suprime Records. After debating against herself for a while she accepted. Verena, along with Markus Shaffarzyk (aka DJ Novus) was one of the faces for Groove Coverage when they first started, even though she was not the lead singer. This was because other vocalist Melanie Münch (Mell) was pregnant and could not travel to the locations of live gigs, photo shoots, and music video sets.

Verena has sung lead on a number of songs done by the group including, Lullaby for Love and Rock, and has had solos during the bridge of songs such as Only Love and Because I Love You. She appeared in two of the group's music videos, God is a Girl and The End, although in both of these songs Mell sings the lead while Verena provides backing vocals. Verena was the stage performer miming the lyrics to their hit songs while lead vocalist Mell was pregnant. Since then Verena has taken on a more behind the scenes or back seat role in the group, while she continues to write songs and record backing vocals she has been absent from video and photo shoots as well as live performances. Verena was one of the coproducers for the group's 21st Century album.

2004 : Verena sings lead for the song Face 2 Face by Future Trance United (a group formed by many successful German DJs, including Axel Konrad and Special D). The same year, she did vocals on Spring Break's single Big Bad Love. Working with Special D on his album Reckless, Verena wrote and provided lead vocals for the song Keep The Faith.

2005 : Verena was the voice on Spring Break's singles Shut up and on Age Pee's When the Rain Begins to Fall, 2 Axel Konrad projects.

2006 : Verena contributed to vocals for the Renegade Masterz (another Axel Konrad project) songs Chrystal Ship. She was also the voice on Age Pee's Hymn and Out of the Dark.

Verena runs a music school called Fashion Music, where she teaches students singing, piano and the art of music composition.

Listen to Verena on Radio Euro Classic, the eurodance radio