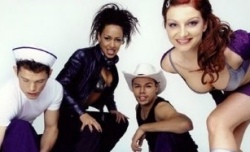 22/05/2019 : Vengaboys' hit We're Going to Ibiza tops the charts again in Austria, as it became the hymn of anti-far right protesters after a scandal leading to vice-chancelor resign.

The Vengaboys are more an euro-pop project than a real eurodance project at the litteral sense of the the term. Originally, "The Vengaboys" was a working name of the two Dutch DJ's, known as Danski and Delmundo. Their real names are Dennis van den Drieshen and Wessel van Diepen. Wessel van Diepen is a famous RadioDJ in the Netherlands and he wants to stay anonymous. Wessel van Diepen made more productions. In 1991 he got a big hit with James Brown is dead from L.A. style. In 1994 he got a project with Lick ft. Kentucky. Nakatomi from Children Of The Night is from Wessel too.

The origin of the Vengaboys, according to van Diepen, comes from the time when they were touring with their school bus across Spain from 1992 till 1997. In the summer they placed their equipment on various Spanish beaches to organize illegal beach parties. The parties usually ended when the Guardia Civil showed up. Being both Party-animals and producers, Danski and Delmundo had some Underground Club hits in 1996 and in 1997, which have been pressed in limited editions. They are also the producers of the E-Motion project. During one of the hottest Spanish summers (1996), The Vengaboys met up with Kim Sasabone and the other band members (Roy, Denice and Robin) at one of their beach parties. During the autumn of 1996 the idea grew that it was time to expand the over successful parties throughout the world. They would be performing under the name The Vengaboys ("Venga" means "come on" in Spanish) .

One of the band's particularity was that they were always wearing each a special outfit. The frontlady Kim Sasabone (April 1st 1974 from Salvador) always appeared wearing a sexy camouflage outfit. Roy Olivero-Den Burger (aka Roy Darman, born 31 July 1975, coming from Trinidad), then later his replacer Donny Latupeirissa, were dressed as a cowboy. Denise Van Rijswijk (born October 20th 1978, dancer from the Netherlands) wore a disco outfit. Robin Pors (born January 1st 1978) then Yorick Bakker (born July 10th 1976) played the role of a sailor.

Danski and Delmundo based themselves in a well-equipped studio in the northern part of Europe, while the band members continued their oversuccesful European tour under the name The Vengaboys. The first two singles only had a local success. Parada De Tettas, only featuring Kim (credited as Sonia), and only released in the Netherlands, reached number 14 in the charts. To Brazil was a Duitch summer hit, reaching the #22 position. Everything began with the single Up and Down, which was released in March 1997. It went Top 5 in the Netherlands, Denmark, France, Spain in fact, it was a big hit across Europe, reaching number 4 in the UK. The UK really caught the Venga-flu, where the band have since had two numbers ones with Boom Boom Boom Boom (including remixes by Brooklyn Bounce and the Klubbheads) and We're Going To Ibiza. Along with We Like To Party, these four singles have given the band a combined sales total of almost 2 million singles in the UK alone.

The first Vengaboys-album, first called The Party Album, then strangely renamed Greatest Hits, turned out to be a worldwide bestseller. It went platinum in the U.K., Germany, Scandinavia, Belgium, South America and India. The release in America and South Africa meant gold, while sales in Holland and Canada resulted in triple platinum. So far, the Vengaboys have sold over 10 million singles and 4 and a half million copies of their albums, proofing to be the most successful Dutch pop group ever.

In March 2000, the Vengaboys released their second album, called The Platinum Album, which includes the chart-topping hit singles Kiss (When The Sun Don't Shine) and Shalala lala. The expectations were that this album, which already went gold in the Netherlands, would exceed all previous sales. This album also introduced a new member : Yorick, who replaced Robin who wanted to pursue a solo-career.

Besides their musical talents, the Vengaboys have always found a way to draw the attention of the press. They once threw a 10000 $ amount cash into the audience during a concert in Barcelona ('Music for the people, money for the people'), promoted their single Kiss (When The Sun Don't Shine) by setting up the world record for the Longest Kiss ever and have been arrested by the police at an airport because of the dangerous looking 'bullet-belt' singer Kim usually wears. Also, an autograph-session in a warehouse in Tokyo had to be stopped when an immense amount of fans literally tore down the store, the band nearly survived a plane accident in Bombay and they made front-page headlines by refusing the Dutch Export Prize (they told they only accepted prizes awarded from the public). With more sunny music on the way and a fully booked tour schedule - they performed over 190 times in 32 different countries in the past year.

After Kiss they released Shala Lala, which became a world wide hit, but surprised the fans. It included a remix by Alice Deejay and an uncensored version of the video of Shalala Lala .

On the 15th of April at the TMF awards, the Vengaboys won an award for the best dance act Holland. Roy gave this award away to an fan, he said :" This award is for you, the fans !". The next single was Uncle John From Jamaica, although it had great expectations the chart positions were disappointing.

The following single to be released was Cheekah Bow Bow (That Computer Song), and it was not featuring Kim's voice but a computerized voice.

The management of Irish boy band Westlife ordered the Vengaboys to edit the video for their most recent single, Forever As One. The clip's original version featured a short scene in which the members of both bands greet each other. The next single to be released was entitled Take Me To The City. It had been originally released for the Charlie's Angels movie's soundtrack. "Take Me To The City is a real energetic song, with the familiar feel-good Vengaboys-sound. I think the filmmakers can be really satisfied with their choice", singer Kim says.

In 2002 Denice and Yorick left the band. They were replaced by Mark and Lilly.

2004 : the Vengaboys more or less broke up. Roy went on to become a flight attendant for KLM Dutch airlines after the band's breakup. Denise joined the Divas of Dance. She married Winston Post. Her full name changed to Denise Post Van Rijswijk.

2006 : the Vengaboys appeared at G-A-Y on Saturday 15th July 2006, and performed eight of their singles. Roy was replaced by Donny. The song We Like to Party was played in Busch Stadium in the US after the final out of the 2006 World Series, which was broadcasted on Fox.

2008 : Denice released a cover of Paula Abdul's hit Straight Up. The Vengaboys did a UK tour in March and there are unconfirmed rumors about a new single entitled Partylife.

2010 : after 10 years of silence, the Vengaboys were back with a brand new single entitled Rocket to Uranus. The videoclip featured blogger Perez Hilton (rumors had first announced cameos of Lady Gaga or Alice Deejay).

2011 : According to rumors, the Vengaboys's next single could be All We Wanna Do. They performed it at several events last year, but no official confirmation was given.

2012 : the Vengaboys released a double CD Best Of (Australian Tour Edition). Chorus of Boom Boom Boom Boom was borrowed by Rye Rye. On their Twitter account, the Vengaboys accuse RIO of having stolen their We Like To Party synths for their latest single Party Shaker.

2013 : As of January, Vengaboys have been playing a new single called Nightlife Of Ibiza, which is scheduled for a Spring 2013 release. They are also rumored to be working on a brand new album in the studio. The new single was confirmed by their official tour page in early 2013.

The Vengaboys official homepage
Vengazone
Vengahome
Thanks to Harry and Tyler