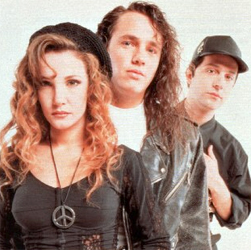 Giacomo Maiolini (sometimes also called Mark Kinchen, Kardivo and Gianni Coletti, no one really knows what his real name is) founded Usura (sometimes written U.S.U.R.A.) in the early 90's, together with producers like Alessandro Gilardi, Walter Cremonini (co-producer of both Jinny and Antares) and Roland Armstrong "Rollo" (producer, co-producer and remixer of many dance/techno projects during the 90's such as Felix, Livin Joy, Pet Shop Boys, Faithless, M-People, Captain Hollywood, BBE and many more).

The name Usura seems to be taken from Maiolini's mother who's name is Ursula. He also dedicaded their first single Open Your Mind to her.

They created a sound that gathered fans and success all over Europe. Their music was inspired by the "underground-techno" that was very popular in Italy at that moment, but they made it a bit more mainstream and often added some kind of guitar riff to separate their songs from others. Their first hit Open Your Mind was released in 1992 (under Deconstruction records) and became a smash hit all over Europe. The video was played on heavy-rotation on MTV. Their follwing singles didn't reach the success of Open Your Mind but they were still very popular among dance music fans, especially in Italy where their songs were played a lot on the radio stations. Sweat was released in 1993 under Deconstruction records and published by Jacomo Music. It gathered the creative talents of Cremonini, Varola, Comis and Spreafichi. Guitar was played by Newfield. Tracklisting varied according to releases : for instance the vinyl released under Time label in Italy included a High Density mix, a Radio mix, a Hazard mix and a Sintagma mix.

The Spaceman was released by Time Records and published by Sym Music. Drive Me Crazy was a very nice eurodance track with vocals of Nicole (who also released some solo singles such as Pump It Up or A Small Entrance To A Large Spectrum).

In 1995 they teamed up with their label mated Datura and the result was astonishing ! The single Infinity grabbed almost as much success as Open Your Mind did. Usura was back for good, we thought, but we were wrong. The project released a couple of more songs, followed by the remake of Open Your Mind in 1997 (remixed by DJ Quicksilver) but they never found their way back to the big scene, and Trance Emotions in 1998 seems to be their last release.

Maiolini has been releasing several songs since the Usura-era, but he has been using different names everytime so it isn't easy to locate him. Rumours say that he has worked a lot with JK and more recently for Whigfield's comeback.

Listen to Usura on Radio Euro Classic, the eurodance radio