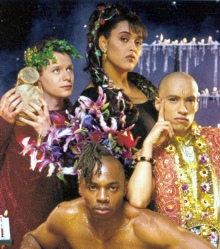 30/04/2014 : Urban Cookie Collective and CJ Stone released last month a 2014 version of UCC's hit Feels Like Heaven (thanks to Guillaume).

Behind Urban Cookie Collective stands Rohan Heath (born 19th July 1964 in Great Britain), keyboardist, who writes and produces the songs. He had formerly worked with Yargo and A Guy Called Gerald. The female vocalist is Diane Charlemagne, who also took part to the writing of some of the songs. The other members are Simon Bertall (born on the 17th October 1967) and Peter Samson (bongo player, born on the 15th of May 1968). Also were included, Marty (MC) and DJ Pete (DJ). Some guest rappers also took part to the project : Lovedog on High On A Happy Vibe, 8 Bar Wizard on Spend The Day.

R. Heath had learned classical piano as a child, going electric in time to perform with the latter two outfits. He had decided on music after abandoning a PhD at Vermont University. After a tour of Japan supporting the Happy Mondays, he left A Guy Called Gerald to release Hardcore Uproar as Together, which made number 12 in the UK charts in August 1990. After a brief stint with Eek A Mouse, he elected to concentrate on solo work, and inaugurated Urban Cookie Collective.

UCC achieved a major breakthrough in 1993 with The Key : The Secret, one of the most riveting dance tracks of the season, peaking #2 in the UK, and #5 in the sales charts in Germany. It was originally a track written at home by Heath, in a soul/hip hop vein, produced by Chapter And The Verse on the tiny Unheard Records imprint. However, after a remix provoked a massive club response it was picked up by Pulse 8, who also issued a double album the same year. A special UK remixes CD was also released for this single.

The follow-up Feels Like Heaven was also very successful, it reached UK charts position #5, and #12 in the German sales charts.

Then came the singles Sail Away, which reached #18 in UK charts and #25 in German sales charts, then High On A Happy Vibe, which only scored #31. The follow-up singles Bring It On Home, So Beautiful, Rest Of My Love, Spend The Day, Ain't It A Shame (featuring the voice of Rachel McFarlane from N-trance) and more recently Champagne Supernova were not very succesful.

The Key The Secret was recently covered by Phobos & Deimos. The Love Parade 2003 theme also used the same sample.

2013 : The Key The Secret was covered by SAIFAM project DJ Space 'C.

Timeline Diane Charlemagne at www.lostwishes.com
Thanks to Christian DTM Nolimits and Nico