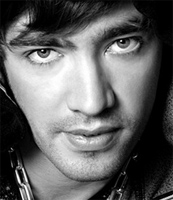 18/04/2019 : Arsenium teamed once again with singer Mianni to release a single in Russian entitled Ya Lechu Nad Tantspolom (I am flying on the dancefloor)

29/06/2017 : Discover the videoclip for Arsenium's current single A On Drugoi, Mama. Video was shot in Delphin Be Grand Resort in Antalya (Turkey). It was directed by Eugene, produced by Angela Zhgutova.

Moldovan singer Arsenie Todiraş was born on July 22nd, 1983. His mother worked as a doctor, his father as an engineer. He has a younger sister. His parents gave him the chance to decide his way of life all by himself, and his biggest dream was to become a musician... He started to write his own songs when he turned 15 and at the age of 16 he got involved in a Moldovan folk band named Stejareii. When he was 17 he started to take singing lessons with Russian opera singer Larisa Shulga.

He then became the youngest member of boys band O-Zone, which scored huge hits with Dragostea Din Tei and Despre Tine, selling millions of records. He then started a solo career under the artist name Arsenium and released his first single Love me Love me.

In 2006, with Natalia Gordienko featuring Connect-R, he competed at the Eurovision Song Contest in Athens, as representative of Moldova with his song LOCA ("Crazy" in Spanish), finishing in 20th place with 22 points. The same year, he took part in the Dansez Pentru Tine Dance Contes, the Romanian version of real-TV show Dancing with the Stars, and took the second place (winner was Romanian singer Andra). His first album The 33rd Element was released in Romania and the rest of Eastern Europe in the summer.

2007 : in June Arsenie released his 3rd single Professional Heartbreakers along with a 3D animated videoclip.

2008 : Arsenie released the single Rumadai, which was a summer hit in many European countries.

2012 : he released the single I'm Giving Up under the name Arsenie.

2013 : Arsenie recorded a new song entitled Aquamarina which premiered on radio Muz.FM on May 8th.

2014 : Arsenium teamed with Sati Kazanova (ex lead-singer of Russian girls-group Fabrika) for single Porque Te Amo (Russian title was До рассвета which means Before Dawn). Then he released a Russian version of his 2006 song Loca.

2016 : Arsenium's new single was entitled Tolko S Toboy (Only with you). A few months later, he released the English version entitled What Is Love.