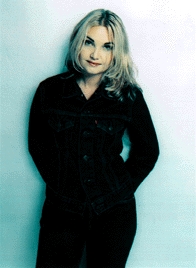 Tiggy (Charlotte Vigel) was born and brought up on the island of Bornholm where, thanks to her parents' great interest in amateur theatricals, she made her stage debut at the tender age of 10 years. As a result of her theatre performances, it was only natural that she developed a great interest in dancing and this led to her taking part in a number of competitions all over Denmark as well as to forming her own dance group.

It was when Tiggy was "sweet sixteen" that she started in earnest to concentrate on music. She became the lead singer in both a dance band and a rock band and performed at numerous concerts. She went on tour with Next Stop Soviet and took part in the Danish weekly magazine, "Se og H¢r"'s Melodi Grand Prix competition, winning a place in the finals. After an open-air concert, Tiggy was offered a record contract by a German producer from Hamburg.

In 1990, Tiggy got the job of news presenter on TV2 Bornholm and was an immediate success.

In 1991 Tiggy moved to Copenhagen, where she at once became involved in, and a member of, a cabaret trio. At the same time, she got a steady job with Fullmoon Studio and has been one of its lead, backing and jingle singers ever since.

In 1994, after a lot of encouragement to develop her singing talent more seriously, Tiggy started taking lessons at a music school in Lund, Sweden. Shortly afterwards, she enrolled at the Copenhagen Academy of Music.

In 1995, Tiggy attended an audition and was straight away taken on as member of a girl trio. In April that year their single, Surprise Surprise was released and the following month, the trio was invited to perform on "Eleva2ren", a popular Danish TV entertainment programme. Then things started moving and Tiggy was offered the job of singer in the Danish Ny Teater production of the musical farce, "La Cage Aux Folles" and ended up both singing and dancing as well as performing a small acting role. Carried away by working, Tiggy went on to land an engagement in Betty Glosted's summer cabaret.

For years now, Tiggy has been a solo singer on several "Krumme" (a popular Danish children's comedy film) soundtracks, so she was also a soloist on "Krummernes Jul" (the Christmas version of the film series). She has also been the lead singer in several bands including Streetbeat and Legend.

In 1996, Tiggy's collaboration with Flex Records started. This was in connection with the song Ring A Ling, produced by Hartmann & Langhoff, who also worked with Aqua and Me & My etc etc. The collaboration worked out so well that the song turned into a smash hit. The single was released on 29th January 1997 and after only 8 days in the shops, it shot to No. 1 on the official single sales list. The song went platinum in record time (less than a month) and stayed at No. 1 for 8 weeks.

The follow-up single Simsalabim, again produced by Hartmann & Langhoff, was released on 16th April 1997 and followed in Ring A Ling's footsteps by immediately zooming to No. 1 on the sales list. Tiggy's debut album, Fairy Tales was released on 7th May 1997 in connection with a huge release party at the Park Club in Copenhagen. The album reached gold with provisional sales of 40,000 after only 2 weeks and the final sales figures were extremely close to platinum. This album also took Tiggy's music outside Denmark and Fairy Tales was released in several countries including Mexico, Japan, Spain, Belgium and Russia.

On 2nd September 1998 the first single, Hooked On A Feeling, from Tiggy's second album, was released. The style of the new album is pure pop music, which is less like Euro pop than that of the debut album, Fairy Tales. The new album has been produced by Hartmann & Langhoff, Sunzet, Candy Hill (Ace of Base, Ultimate Kaos) and several others. The album was expected to be released mid-February 1999.

Charlotte currently works as a radio-host, in the morningshow "Morgenhyrderne" (the morning-shepards) at the Danish commercial radiostation Radio 100fm together with two Danish male comedians; Lasse Rimmer and Jacob Wilson.