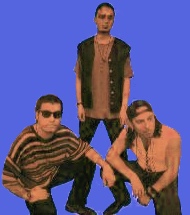 Ti Pi Cal is a Sicilian formation (South of Italy). It took its name from the DJs and producers' names first syllabes : Daniele TIgnino, Riccardo PIparo, Vincenzo CALlea. After rather anonymous debuts in 1993 with the mix I Know, and a good test under the name of Power Fun, they entered easily the road of success. To help them in the first two years, had contributed in particular way the voice of the American male singer Josh Colow. He interpreted Illusion (which remained 13 weeks in Hitparade), Round And Around (which stayed 17 weeks !), The Colour Inside (12 weeks in a row at the top of the Italian Singles Sales Chart), and It Hurts (10 weeks). After the the single Why Me (which stayed "only" 7 weeks), published in June 1996, the collaboration between Josh and Ti Pi Cal ended.

This divorce could had been be reflected negatively on the future records, but actually it is served to the Sicialian group in order to modify the genre, moving from underground style, towards eurodance music. For the vocal part they chose Kimara Lawson who contributed to bring back Ti Pi Cal in all the Charts tops with Hidden Passion (13 weeks), Live For Today, Follow Your Heart and Music Is My Life. All singles were released under Lup Records.

In 1996, they also released the single Gimme Love under the project name Kasto.

After all these hits, which had helped them gaining respect in the musical world, every member's desire to concentrate himself on his own producer activity was growing daily. Finally they decided to put Ti Pi Cal on a halt. Tignino created the project Love Bite, Callea gave birth to Bamble B and Naive, Piparo stood behind DeJavu.

Then in 2001 these three creative minds joined again under Ultralab, a young label of Virgin. In spring 2001, the single Is This The Love was out, featuring once again the voice of Josh. It was programmed on all Italian radios and discotheques.

In 2006, a single entitled What I Like was recorded. Featuring Kimara's voice, it was released as promo only.

2011 : Alex Gaudino & Jason Rooney did a 2011 remix of Ti Pi Cal's single Round And Around. Ti Pi Cal are back with a new single entitled Stars, featuring vocals by Josh. An album also entitled Stars followed. Then came the single Where Is The World, a pop acoustaic track.