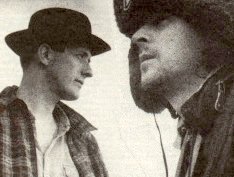 02/09/2017 : Last August 23rd, 23 years after they put an end to their carreer, The KLF came back in an ice cream van for a signing (rather stamping) session of their newly released book "2023 The Trilogy", a dystopian fiction.

06/01/2017 : 23 years after they officially ceased activity, a teaser poster was published, suggesting that The KLF aka The Justified Ancients of Mu Mu could be preparing a comeback.

18/01/2013 : Despite being deleted over 20 years ago, a number of albums by The KLF appeared a few days ago on iTunes, Amazon UK and Spotify.

20/12/2011 : Almighty Records created a tribute project called People Of 'K' feat. Crystal to cover The KLF's biggest hits. After Justified And Ancient and Last Train To Trancentral, they just released What Time Is Love?.

KLF means Kings Of The Low Frequency or Kopyright Liberation Front. The 2 producers Bill Drummond and Jimmy Cauty featured various rappers (such as Ricardo Da Force ) and vocalists. Trancentral was the name of their recording studio.

At the start of 1987 The Justified Ancients of Mu Mu (the JAMs) released their debut single All You Need Is Love, an anti-AIDS anthem featuring large chunks of illegal sampling, to great underground success. The follow-up album, 1987: What The Fuck Is Going On? continued the sampling trend, and managed to get them sued by Abba - even travelling to Sweden to appeal to them directly could not change Abba's mind, and all copies of 1987 were (supposedly) destroyed. One of their infamous press released of the time said 'We'll make another LP before Christmas, after that fuck it!'

In 1988 they decided that they wanted a UK #1 single, so they wrote one. Masquerading as The Timelords, they took three records they hadn't written, put them together, and reached number one with Doctorin' The Tardis, inspired from Dr Who TV series. Gary Glitter was enlisted to help with the remixes. After that they published a book, 'The Manual: How To Have A Number One The Easy Way to tell everybody how it was done, and how they too could top the charts. It was reportedly used by the project Edelweiss to secure their hit Bring Me Edelweiss.

On February 12h 1992, they appeared on the Brit Awards in a collaboration with Extreme Noise Terror, with whom they also worked on an also unreleased Black Room album. They performed a live version of 3 A.M. Eternal : a "violently antagonistic performance" in front of "a stunned music-business audience". Drummond and Cauty had first planned to throw buckets of sheep's blood over the audience, but were prevented from doing so (due to opposition from BBC lawyers and Extreme Noise Terror themselves). The performance was instead garnished by a limping, kilted, cigar-chomping Drummond firing blanks from an automatic weapon over the heads of the crowd. As the band left the stage, The KLF's promoter and narrator Scott Piering announced over the PA system that "The KLF have now left the music business". Later in the evening, the band dumped a dead sheep with the message "I died for ewe - bon appetit" tied around its waist at the entrance to one of the post-ceremony parties. New Musical Express magazine listed it at #4 in their "top 100 rock moments".

The retired KLF deleted all of their past releases and consequently raising the prices of original KLF material greatly. "The last grand gesture, the most heroic act of public self destruction in the history of pop" as qualified by the magazine Select. The KLF quickly became 'legend' and the mystery around their sudden departure from the music industry became an enduring mystery...

During 1994 they attracted media attention as the K Foundation, mostly notably for burning one million pounds on a remote Scottish island, and undermining the art world's respected Turner Prize (20,000 pounds for the best work of art) by awarding, on the same night as the Turner award was announced, their own award of 40,000 pounds for the worst work of art- to the same person...

In 1995 they contributed a two-minute track, The Magnificent, to the 'HELP' charity album. In 1996 Bill Drummond, co-wrote a book, Bad Wisdom, about the experience of taking an icon of Elvis to the North Pole. Since then many rumours about what they're up to have circulated, but nobody can say for sure just what they're up to...

They released one track in 1999 under the name of 2K: Fuck The Millenium (a remix of What Time Is Love? featuring Acid Brass and incorporating elements of the hymn Eternal Father, Strong to Save), which entered top 40 in the in the UK only. They performed it once at London's Barbican Arts Centre, dresed like 2 elederly people in motorized wheel-chairs.

These activities were accompanied by the usual full page press adverts, this time asking readers "Fuck The Millennium: Yes/No?" with a telephone number provided for voting. At the same time, Drummond and Cauty also founded K2 Plant Hire, with plans to build a "People's Pyramid" from used house bricks; this plan never reached fruition

Bill Drummond continues to work as a writer and conceptual artist. Jimmy Cauty has been involved in several post-KLF projects including the music and conceptual art collective Blacksmoke and the electronic music group the Transit Kings, which saw him reunited with his former partner from The Orb, Alex Paterson.

The KLF were told to have released a live album in 2001 but actually it was just a bootleg. In January 2002 Muzik Magazine made a top 50 of best dance albums all time. Chill Out and The White Room both were in the list.

2010 : Bill Drummond continues to work as a writer and conceptual artist, with occasional appearances on radio and television. Jimmy Cauty has been involved in several post-KLF projects including the music and conceptual art collective Blacksmoke and, more recently, numerous creative projects with the aquarium and the L-13 Light Industrial Workshop based in Clerkenwell, London.

2011 : Bill Drummond and Jimmy Cauty appear to be making another comback under the name FLK. In June they played one concert dressed as cows.

2017 : in January, a teaser poster from K2 Plant Hire Ltd appeared. on August 23rd, 23 years after they put an end to their carreer, The KLF came back in an ice cream van for a signing session, not for a record, but for a book : "2023 The Trilogy", a sci-fi novel, "a utopian costume drama, set in the near future, written in the recent past".

Thanks to Shimon O'Hana for the charts positions
Thanks to Rogier Verkroost, Allyson, DJ Stakan and Iline (trancentral.ru) for the latest news

Complete your The KLF collection

More about The KLF