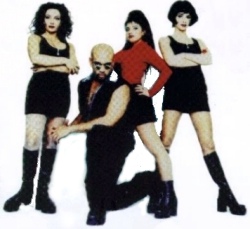 28/07/2003 : MikeBoy's site Finnish Eurodance changed URL, it is now called Serious Eurodance and among other very interesting eurodance infos you can find the interview of Charles Simmons, ex member of the The Free project...

The group was formed in 1994 by Felix J. Gauder and Olaf Roberto Bossi. Together with Charles Simmons, the frontman and singer of The Free, they composed and arranged their music in a high-tech home studio. They spent weeks composing and arranging intro, strophe, bridge and refrain so it should be a perfect rhythm, with groove and melody all in one piece. With meticulous detail work and with great enthusiasm the result was the typical The Free chart- and club compatible Euro-Pop-Housemusic style and also some sentimental Soul-ballads.

Everything has begun with their first release Born Crazy on Sony Music Dance Pool, which was accomplishedby the co-operation with manager Andreas 'Bär' Lasker and his BearMusic Factory. In the typical euro style Iris Trevisan, singer at that time, and rapper Charles Simmons sang themselves into the 'earthlyheaven' of the artists. At the first go the debut single Born Crazy managed to hit the top 50 of Media Control.

With the second single Lover On The Line the producers together with Charles Simmons who also works as songwriter prepared thefurther success of The Free. Lover On The Line became the club and disco hit as such and the paved the way for countless LIVE gigs across Germany partly in the course of the Coca-Cola Mega Mix Connection. Thissong raced into the top 40 as well and the third single Dance The Night Away reached no.44 of the MCC despite the easing off euro trash movement.

In the middle of 1995 singer Iris Trevisan left The Free for health reasons. The newest member of The Free was singer and front woman Alida Johnson (Ayla J). With her, new tracks were recorded, produced and dressed into a club and chart compatible garment. However, none of them had been released as single.

With their now released fourth single Shout The Free prove that the switch to pop house did more than succeed. Solely the name Charles Simmons stands for one of the best soul/house voices in the dance of thenineties. An additional pleasure are the Shout Remixes by DJ Quicksilver, Nico Herz und Drop Dishes which where specially ordered for the clubs.

At the album Crazy Worlds, published in April, there were more than the already mentioned titles, e.g. Loveletter From Space which could be confidently classified with "the finest in euro pop house". Another bonus are the partly remixed tracks Lover On The Line and Dance The Night Away as well as the wide musical spectrum from euro house via club soul up to catchy soul ballads. About Loveletter From Space : "I believe the track was inspired by a love letter Olaf wrote to his then girlfriend (now his wife since over five years.)" Charles Simmons explains.

Also in 1996 The Free planned to perform their music live. With a new stageshow, new outfits, the professional dancers Nejet Yolcu and Virginia Michailoglou and a polished choreography they will present themselves real live on tour again.

Afterwards a single was recorded but never released, Fly, still featuring Charles' voice alone. It also included a B-side entitled You're The One For Me. Afterwards, the contract of the group with Dance Pool (Sony Music) expired, and was not renewed.

2001 : a track called Loveletter From Space 2001 was released under the name Relounge feat. Charles Simmons.

2003 : in an interview done by Mikeoy (Serious Eurodance) in July 2003, Charles Simmons gave some news about the different members of the project. Olaf Bossi was attending Audio Engineering school, Felix Gauder was currently producing Jimmy Sommerville, and also working on his project Novaspace. Charles himself was doing lots of live gigs in Germany, a lot of songwriting and some producing, mostly for R&B, Hip-Hop and Pop projects. and Alida (Ayla J) got married and had moved in the USA. He concluded : "We've all moved on, but The Free was a nice ride".

© 1996 NMDP
Thanks to J.D. Haltigan for some sleeves
Thanks to MikeBoy of Serious Eurodance


Links to The Free

Interview of Charles Simmons
The Free at Dance Artists Info

Complete your The Free collection

More about The Free

Listen to The Free on Radio Euro Classic, the eurodance radio