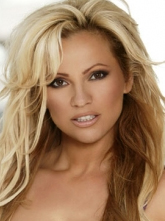 24/05/2008 : Tatjana Simic is back with a new single released in the Netherland last January, and entitled Ik Laat Je Gaan

Tatjana Simic is a Dutch singer, actress and model, born on June 9th, 1963 in Zagreb, Croatia where she studied at high school. In 1979 she moved to Rotterdam in the Netherlands with her sister and mother, to start a new life. She worked as a tour guide in the Dutch city, before landing herself a job in the local town hall's sports and recreation department.

After winning a competition organised by a Dutch magazine, she started her modelling career in 1985. She also appeared in TV commercials. This is how she was spotted by the producer of the movie Flodder, the story of a rather a-social family, getting a chance to live in an upper-class neighbourhood. Tatjana played the role of Kres Flodder, the naughty daughter of the Flodder family. Flodder became Holland's most successful movie ever, seen by more than 2,5 million people in that country.

In 1987, after taking lessons for several years, she released her very first single Baby Love. The follow-up Chica Cubana (a cover of a sog by Laurie) was top 10 in Europe, leading her to the status of a sort of Dutch Sabrina. It was followed by Awaka Boy, produced again by the famous Italian producers Giuliano Crivellente and Mauro Farina.

1990 : Tatjana played the roles of Suzy in the Dutch film "My Blue Heaven".

1992 : she recoded a duet with Gerard Joling entitled Can't Take My Eyes Off You which was very successful. She appeared in the movie Flodder 2 (aka Flodder in Amerika), which again broke all box-office records. She aso played in the Flodder TV series. And in 1995, she was back in Flodder 3.

Tatjana's popularity has also spread further afield including South Africa and the Far East where she has toured. In 1993 she visited Miami for live appearances and to make a video for Feel Good and last year she modelled for the first 'Tatjana Calendar' which now adorns the walls of thousands of European homes and offices

1999 : The single Crazy Way About You was released, followed by Wait And Wonder.

2000 : Tatjana released Baila Baila. A special edition was released, including 3 videoclips, a calendar screensaver, a video-puzzle, a making of, as well as some photos. Then she got signed by the label Red Bullet, and came Be There In Time, and Beautiful.

2008 : Tatjana is back with a single in Dutch entitled Ik Laat Je Gaan and it went #11 in the Dutch charts. A brand new album should follow.

Listen to Tatjana on Radio Euro Classic, the eurodance radio