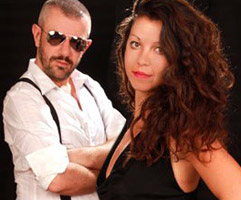 20/09/2011 : You can watch an amateur video of Systematic's performance at disco Odissea (Spresiano, Italy) last August 14th. (Thanks to Klems)

20/08/2011 : Systematic are back ! They performed in Spresiano (Italy) on August 14th and announced on their Facebook page that they were planning a new single and a Greatest Hits Remixes.

Systematic was a X-Energy project created by Giuseppe Fuccio aka DJ Albino in 1994. Fuccio got inspired by Einstein Dr DJ's huge hit Automatik Sex and that's how the name Systematic came to his mind.

The female vocalist is named Eve, an ex-member of the Oops project. She has also collaborated with some member of the 883, and she used to be the leader vocalist of Delta V. She is a very sportive woman (she plays tennis, basket, and also boxing). The second part of the project is named Reikj, who preferes more cultural activites (writing, reading, cinema).

Systematic's history began with a first single entitled I Got The Music. It borrowed a sample from C+C Music Factory Keep It Comin '(Dance Till You Can't Dance No More!). It was recorded at Indeep studios in Milano, arranged and mixed by DJ Albino and Vimi. It was quite succesful in Italy, and they hired Nathalie Aarts for live appearances.

The same year, a second single was released : Love Is the Answer (arranged and mixed by Lambi and DJ Albino, sampling Blind Truth - Why Can't We See). Two later they came back with Stay Here In My Heart (probably featuring the voice of Sandy Chambers). Following the rise of the dream house phenomenon that was very popular in 1996, they also created 2 instrumental and melodic tracks : Suite In#1 and Clavier Concert.

Afterwards their were some changes in the production staff. The new team realized Everyday, released with many remixes : 132 bpm for Original Mix; while the Cheesy & Tacky Mix and the Doc Brown Powered travel to 135 you strike yourself to the minute. It used all the successful receipies of the moment : vocoder, autotune, bassone in eighth, agreements reduced to the bone "and a melodie that won't exit you from the brain ", explains Eve, the singer of the group.

Listen to Systematic on Radio Euro Classic, the eurodance radio