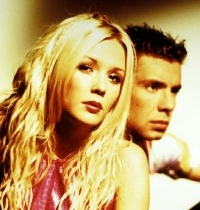 11/05/2018 : In last monday's episode of Liefde voor Muziek, candidates sung their versions of Sylver's hits. As for Silvy, she performed a cover of Elton John's Hopelessly Devoted To You.

07/07/2017 : Sylver published the videoclip for their current single Turn Your Love Around.

07/06/2017 : Yesterday, Sylver shot the videoclip for their new single Turn Your Love Around. It was directed by Şenol Korkmaz.

The leadsinger of the project is Silvy "Melody" De Bie, born 4th April 1981 in Lier. Sylver is the result of her collaboration with DJ Wout van Dessel (born 19th July 1974). Silvy De Bie started her musical career at the tender age of 9, the Belgian TV series De Kinderacademie (the children academy). A law forbidding less than 16 years old children work put an end to her early carreer.

Turn The Tide was first released under the project name Liquid feat Silvy. After its immediate success in Belgium, they signed a contract with the American record company Universal. Turn The Tide, was planned for release in the US in August 2001. Meanwhile, it reached # 1 in Israel, and # 4 in Germany (it stayed in the German top 10 during 12 weeks). The follow-up Skin was also very successful in Israel where it reached # 2. Then Forever In Love, reached # 10 in Germany and # 3 in Israel. The follow-up single was Forgiven, another brillant euro-trance track, released on 15th October 2001.

2002 : Sylver took part to the Dance United project, created to help the victims of the floodings in Germany. The project released a single called Reach Out on the 30th of September.

2003 : they released their next single called Living My Life on January 13th 2003 as vinyl, then on February 24th as CD single. A month later the full album called Little Things (and not On The Road as it was first announced) was out.

In September, their new double A-side single was ready : it contained the tracks Shallow Waters (a slow song) et Confused (in the normal style)

2004 : Sylver released a promo vinyl entitled Love Is An Angel. It was released as single in August, and it reached #6 in the German DJ playlist in September.

2005 : in February, the new single Make It (for once, not really a dance song in the usual style) was released.

Wout was caught speeding on the highway E313, 53 km up the speed limit. The court of Turnhout banned him from driving for a period of 3 months. This is already the sixth conviction in the 10 years he has a drivers license.

Take Me Back was released on the 19th of September. The clip was a live video, shot during a performance in Moscow.

2006 : they announced a new single and album to be released in April. Working title for the album is Crossroads. The same month, Silvy got married to her boyfriend Khalid in Heist-op-den-berg. On the 1st May, Wout and Silvy were the invitees of the show Kids Top 20.

Sylver's first single from the new album was the ABBA cover Lay All Your Love On Me. Then came One Night Stand in August. In Septembre, Sylver was, as usual, nominated for the Award in the category Best Dance National. They faced the familiar opponents Milk Inc and Ian Van Dahl, but also newcomer Shameboy.

In November, Sylver's new single Why was released. It borrowed a part of the melody of 2 Unlimited's hitsingle No Limit.

2007 : The brand new single The One was released in Germany at the end of June. A Best of album was released in August. In September, Silvy appeared on stage to sing her duet I Don't Care with Linda during Milk Inc's mega concerts Supersized. Silvy gave birth to a baby girl named Noor in November.

Sylver were working on their new album, it should be finished in 2008. Sylvi was seen during an episode of Regi's World real-TV show broadcasted in October, recording a new title.

2008 : in March, Sylver appeared in the Dutch music TV program "Zo is er maar één", about Eurosong. They performed a cover of the the ballad Door De Wind, originally sung by Ingeborg, artist who competed at ESC in 1989. They had already performed in the same show the previous year, that time in duet with Milk Inc, the song Je Hoeft Niet Naar Huis Vannacht. During March and April, they toured through China to promote their album Crossroads

May : Sylver's new single is entitled One World One Dream. It should be the theme song for the Olympic Games in Peking. The album is currently getting recorded, it should be released in Belgium in October.

June : Silvy and her husband Khalid have decided to end their marriage after two years. In October, the new single Rise Again was released.

2009 : The videoclip for the single I Hate You Now was shot on 26th February in Hotel Bloom in the heart of Brussels. In May, the final title for the new album was revealed. Though Resurrection was the workingtitle, Sylver team decided in the end to name the album Sacrifice.

In June, they shot the video to their fourth single Foreign Affair. The song is one of their rare cover versions.

In October, they won the TMF Award for Best album national. Their next single was a cover of John Miles' Music.

2010 : In January, Silvy shot a TV-spot for car Hyundai Free Mobility. In March, they released their new single It's my Life. Their new album Decade peaked #1 in the Belgian Album Charts. In June, new single Turn the tide 2010 hit the shops.

Commander Tom - Are am Eye?
Dave Kane - Clarkness, Zero Plus
Johnny Viscious - Ecstasy
Milk Inc. - Inside Of Me, Oceans, Losing Love
Tripomatic - Beat On My Drum