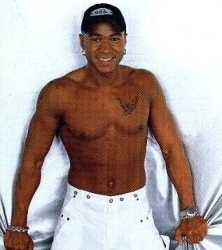 16/07/2019 : Twenty 4 Seven rapper Stay C is writing a new book. Titl will be "Het Wonder Van Waarom". Written in Dutch, it will gather answers to any questions and should be released in September...

12/02/2016 : Discover the videoclip of Muze (Stay C and Doenja)'s new single Don't move. Among the writers who contributed to the song, Shamrock from T-spoon. Video was directed by Zeno Groenewegen.

Rapper and singer Stacey Paton aka Stacey Seedorf was born on January 31st 1969 in Rotterdam (The Netherlands). His parents noticed very easily that he was attracted by everything with rhythm. From a very young age he started drumming on everything that made noise and he started singing along with most of the songs played in his parental home. When he started to make up his own melodies at the age of 8, he was sent to a music-institute to study some instruments like guitar and keyboards. Because of this it didn't take long for him to become the house-entertainer at family-parties, performing artists like Michael Jackson, who was his big idol at that time.

While his friends and family thought it was just a way of filling his freetime, Stay-C knew that music was his life. During the following years he developed himself as a singer, songwriter and dancer. As a member of many rap and dancegroups he was getting ready to be a professional. After a couple of years of doing small performances in small clubs and after recording many, many demo-songs, the first single of Stay-C was released in July 1988 Turn Up The Music.

After the release of this song, Stay-C's professional career started taking off. Not one of the following singles had big chart-succes, but they gave him the chance to get to know the music industry and because he was always trying to perform as much as possible at as many places as possible, his name got wellknown by the incrowd of the dance scene.

When in 1990 the support act of a famous Dutch dance act, that just had a major European hit, got sick, Stay-C was offered to take the place of that support act. He didn't know this Dutch dance act very well, but because he was going to support them during a European tour, this could be good chance for a final breakthrough. The funny thing is that the main-act turned out to be Twenty 4 Seven featuring Captain Hollywood & Nance. The tour went very well and Stay-C got to know Capt. Hollywood and Nance quite well : they had a great time for the whole tour. The Twenty 4 Seven-management was very satisfied with Stay-C as the support act, because he gave every he got as soon as he got on stage and the audience reacted very well on him as an unknown artist.

2 months after the tour Stay-C was called with very surprising news and a great offer : Captain Hollywood went solo and his name was called to take his place. The producer and founder of the group, Ruud van Rijen, wanted him to audition as soon as possible. He was convinced of his talent and before they realised it, the song was written and the new Twenty 4 Seven-single was recorded. It Could Have Been You, didn't have the expected succes and so Ruud van Rijen decided to change his songwriting-team. Just as an experiment he asked Stay-C to write something for the coming album and... there was Slave To The Music...

The succes of that song is known by everyone and since then all Twenty 4 Seven songs and albums were written by Ruud van Rijen & Stay-C. From the release of Slave To The Music on everything went very fast; huge succes in nearly all territories of the world, many gold and platinum awards, international tours, etc. etc. Stay-C and Nance had a couple of great years and it looked as if everything they touched turned to gold.

Stacey is black-haired, 1.83 m tall and his shoesize is 43. His favorite singers are Michael Bolton, Nat King Cole and George Michael. He also likes the band Earth Wind & Fire. His favorite record is All My Life by KC & Jojo. His favorite movie is Star Wars (because of the special effects). He wears every type of clothing as long as it's not too tight. His preferred cities are Amsterdam and Rio de Janeiro, but he also appreciates South Africa very much. He loves Japanese (Tepan Yaki) and drinking milk. He drives a Jeep Grand Cherokee.

After almost three years of worldwide succes and being together for almost 24/7 (24 hours a day/seven days a week), Nance and Stay-C came to a point where each wanted to go their own way and startup a solo-career. Wham Bam ! was the first solo-single released by Stay-C and in a time where his first album was almost finished, he was called by Ruud van Rijen, who asked him to help him find a new female singer and join Twenty 4 Seven again. Because of his warm and succesful memories of working with the Masterproducer RVR, it didn't take him long to decide ending his solo-activities so far.

With the entry of the new female singer, Stella, a new period started for Stay-C A period where in he's determined to conquer the world once again. In a team where the beautiful and lovely Stella stands by him and with the ever driving force RVR, Stay-C is convinced it's going to be the period of his life.

Stay-C released a cover of Prince's song 1999 with three other artists under the name of 'NLPR'. This name stands for the first letter of each surname of one of the artists : N for Nelson, L for Llorenna, P for Paton (Stay-C) and R for Romanov. Marcel Romanov has also scored some big hits in Germany.

Afterwards, he had some tough years. He tried to find money to maintain his family's standard of living. The result was that did 3 years in jail for carrying ecstasy pills in Australia. He put this time to use in reading books about psychology and Neuro Linguistic Programming.

Stacey started his own company, Lino Dordrecht and worked as a life coach. He still had contact with Ruud van Rijen and they started to write songs together again.

2010 : Stacey appeared with Twenty 4 Seven for some live appearances. In September, it was official : he was back in the project. He shared the stage with 2 vocalists : Li Ann van Groen and Sharon Doorson. Sharon did not stay very long.

2011 : Stay C was featured on Jeronimo's single I am no Superman and appeared in the videoclip as well.

He also recorded a vocal house track with Brothers in The Booth entitled Positivity.

2012 : besides his role as rapper in Twenty 4 Seven, Stacey founded the Stay-C Music Entertainment Academy. In September, he competed during blind auditions of The Voice Of Holland 3rd season but was not selected.

2013 : in July, he was featured on Dirty Ztylerz new single Can You Feel It (Heeeey Yoooo). He also did vocals on Jara van Kesteren aka Miss J'amore's single Out Of My Mind.

2014 : Stay-C was featured on 2 singles by Doenja : Endless Love and Born Again.

2017 : Stay C officially revealed that him and his current Twenty 4 Seven partner Li Ann were a couple in real life.