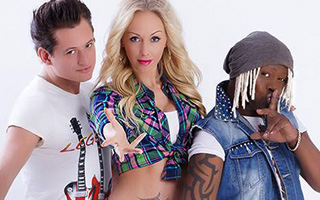 08/10/2016 : Help bring back Sqeezer ! Sign this petition so that real Sqeezer vocalist Alex Prince and Mr President rapper Delroy Rennalls can re-record song Without you.

29/07/2016 : Alexandra Prince, original studio vocalist of Sqeezer project, accepted to be again part of the project in memory of Jim Reeves. Mr President rapper LayZee could join her to re-record Without You, only if you sign this petition.

04/07/2014 : Sqeezer will perform their forthcoming new single Crazy Love during Die 90er MEGA Sause in Metaxa Bay. They have 2 new members : Mikey Cyrox (from real-TV show The Voice Of Germany) and a female vocalist called Olivia.

21/11/2013 : Jim Reeves published a demo of what could be Sqeezer's forthcoming single : Crazy Love.

03/06/2013 : Bella Mee is the name of Sqeezer's new female vocalist. A few days ago, Jim Reeves posted a tiny teaser of forthcoming Sqeezer single. He is currently preparing the shooting places for the new video. And he will get his blond hair again... More infos on his official Facebook page

06/05/2013 : Jim Reeves announced on his Facebook that Sqeezer would record a new version of their hit Blue Jeans next week in Hamburg.

The original group was made of Yvonne Spath then Lori (Loretta) Stern (as female vocalist), Jim Reeves (male vocalist and model), and Tee-Jay (dancer).

The hit that started it all was entitled Scandy Randy, released back in 1995. The producers of the first single were the famous Bermann Brothers (Amber, She Moves). Scandy Randy was so successful that a remixes CD was out on January 27th 1996. The next single to be released was Blue Jeans, produced by N-dee and Frank Lio aka Syndicate Music Production (who would later stand behind hits such as Lou Bega's Mambo no5). On this single Yvonne Spath was replaced by Lori Stern. Lori used to work on Bravo TV.

The third single Sweet Kisses was released on September 3rd 1997 and the Sweet Kisses remixes CD was released on October 11th. Sweet Kisses also became a big hit, ranking more than 11 weeks #1 in the Spanish Music Charts. Afterwards, Tee-Jay left the group, he was replaced by Marc Theven. The 3 first singles sold Gold in Poland, Spain and the Czech Republic.

The album Drop Your Pants was released on September 3rd 1996, including 12 tracks in a 50's style mixed with a true eurodance beat.

Sadly Marc killed himself so it was a tragic news for the group who had to cancel they tour in Spain. At that time they even didn't know if they would come back.

Finally they did, and released Tamagotchi in September 1997. It was an exclusive cooperation between Sqeezer and the Saban Worldwide company. In the end of 1997 Sqeezer was again near splitting up because a letter written by Marc Theven before his death, claimed that Jim, Lori and the Sqeezer managment was to blame for his death. But Sqeezer again managed not to split up.

Tamagotchi was followed by Without You in 1998 (it ranked number 8 not only in Germany, but also Austria and Switzerland) before the release of the second album Street Life. Their new style sounded more like Backstreet Boys, not as eurodance as the first album. Wake Up was the second single to be released from the new album. Then, they released Wishing You Were Here (which was not featured in the album). At that time Lori left the group because she was interested in becoming an actress, she was replaced by another vocalist called Veronica. They both sing together on the track Lonely Nights, a single which was never released.

2001 : after a long silence Sqeezer was back. Jim and Lori were joined by Heidi Goldstein, a model and singer, and the single Remember Summertime was released on September 3rd. Lori also obtained a role in the TV-Serie "Off Road" on ARD channel.

2002 : Sqeezer were searching for a new female vocalist, so they organized a big casting with the help of RTL2. They appeared at the Smart Aachen Heddesheim Chartparty on the 30th March, at the Osnabrück Festival Radio on the 12th of May, at the Leipzig Stadtfest on the 31th May 2002 and at the Salzgitter Festival Radio on the 28th July 2002. The new single was released on the 25th of November. It was entitled 3 Times. Rumors said that female vocals were done by Balca Tosun, Fun Factory's real voice

2003 : Sqeezer are back with a new single entitled Hot Ski Teeny. It was chosen as anthem for the German winter show Apres-Ski Hits 2004. It was officially released in January 2004. The new vocalist, Nicky, was chosen during the real-TV program Casting Agentur on Pro7.

2004 : Sqeezer released their summer single, called Hot Bikini, which was the same song as Hot Ski Teeny, but with new lyrics. They had a special guest, the American rapper Coolio, who not only sung but also had a role in the music video.

2006 : the project got new members : Andy and Sonjia. A 2006 version of their hit single Blue Jeans was recorded and the video can already be seen. Rumors started to spread according to which Lori Stern did not actually sing, vocals would have been done by Alexandra Prince.

2007 : Sqeezer are now Jim, Andy and Daria, and have a new producer, Kdivision. They recorded new tracks, such as Anybody and High Heels (which was written by Delroy Rennalls from Mr President and, according to rumors, sung by Balca). A new single was planned for release, as well as an album called Squeezer Reloaded for the end of this year

2008 : a new member called Mirage (singer, dancer and choreographer) joined the project. He was also seen performing on stage as a dancer for some other groups and artists, such as Alex C.

2013 : A new female vocalist was introduced : Bella Mee. Jim Reeves published a demo of what could be Sqeezer's forthcoming single : Crazy Love

Listen to Sqeezer on Radio Euro Classic, the eurodance radio