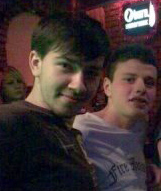 08/11/2020 : Soundstream welcomes a new rapper, Sergey Podolsky, who will replace Yuriy Muktarov aka Spacedreamer. Their new single Music Is Taking Me Higher should be out in 2021

21/06/2020 : Soundstream's next single will be a reloaded version of their song Life Is The Fight

29/02/2020 : Soundstream announced that a new album was on its way, that it would be entitled Summer Wave and would include 20 tracks (Thanks to Eurodance Magazine)

17/01/2020 : Soundstream's new single will be entitled New Day and it is planned for February 7th

Soundstream project was founded in 2008 by Denis Timish (DJ FatCat) and Alexander Bulanov (Bulya), two students of the Kyiv Polytechnic Institute. Actually they had been thinking about it since 2007, but officially everything started on September 17, 2008, with the recording of their first song Feels Like Heaven. The song reached #56 of 18000 in Soundclick.com Dance chart.

The second song was Rainy Day, an instrumental track, recorded half-November. Shortly after, they started collaborating with Andrew Sinenko (aka GungE), who helped with some ideas. By the end of the month a third song entitled Save You was ready. It was the first Soundstream song to feature vocals by Kate Lesing. In early December of the same year, 2 more songs were released : Don't Let Me Go and 4 Ever & 1 Night.

During second half of December 2008, the band members were very busy with the studies so music had to be put temporarily aside. Anyway, they found the time to record See Me Now in a few days before the New Year. See Me Now had success among dance music fans not only in Ukraine, but also abroad, particularly in Russia and Singapore (according to promodj.ru stats). It is considered as one of the best Soundstream songs.

In early April 2009 they recorded their debut album Number One, which contained all band's tracks recorded since 2008. This album was very successful on the Internet. The band took no rest and immediately started working on new songs. But, because of growing disagreements between Andrew Sinenko (GungE) and other band members, DJ FatCat and Bulya decided to stop collaborating with him on on April 23rd.

Partytime, the new album, was out in the end of May and included 12 new tracks, among them Could I Feel This Way Forever, Do You Feel My Love, and Everlasting. A bit later, they made a megamix-album simply entitled Megamix, with the best band's songs from the two previous albums. After some time two new songs were recorded - Planet Beats & Bass and Yesterday Becomes Tomorrow, which sounded rather different from the previous Soundstream songs.

In the mid-June Bulya went to USA for 2 months, so the band had to temporary stop its activities. In September, Soundstream released the Remixes Collection, a compilation, featuring 12 remixes of their songs from the previous albums. Meanwhile, they worked on their third album, which would contain Yesterday Becomes Tomorrow and Planet Beats & Bass. The new album, Midnight Hour was released on October 1st, confirmed the sound evolution of the project : something Scooter-like, with the exception for One By One, a Dancecore/Hands Up song. Despite the change of style, this album had considerable success. Planet Beats & Bass and Better Way (New Version) even got into Promoradio rotation. The songs Feel The Rhythm (feat. Moro), One By One and Yesterday Becomes Tomorrow (#93 in Soundclick.com Dance chart) were also quite popular.

The band members went on writing new songs. Even if their change of music style had been positively welcomed, they decided to return to their classic sound. In the middle of October, they were joined by vocalist Daria Bezkorovayna. They started working on the first song with her. Influenza epidemic quarantine, then the band member's studies, had them postpone their plans...

2010 : Save You (New Bass Club Mix) aired on the dance radio-show "Corehead" at 109fm.net in February. And at the beginning of March Don't Wanna Stop 2010 (Hard Club Mix) was picked up by DJ King Alex (Albatros Music Company) from Ivano-Frankivsk (author of the mix series such as trackANDmix, Dancestream and more). After some time, Soundstream could finally record their first song with Daria Bezkorovayna, Story Of My Life. This was also the last song with her, since Daria unexpectedly decided to leave the band.

Seing that Story Of My Life was featured in the next King Alex mix, and Are You Ready? was broadcasted on "Corehead", Soundstream members knew that they should go on. Beginning of June, the 4th album Dancefloor Generation was out. Made in the continuity of the first two albums, it also sounded professional and diverse. Each song on the album had its own special flavor. But at the beginning the album remained quite confidential : few downloads, little promotion. But suddenly, it gained big success at the popular Russian torrent tracker RuTracker.org, where it got even more downloads than Number One! Moreover, the track Clubland had success in the UK (according to promodj.ru stats) and reached #36 in Soundclick.com House chart.

After Dancefloor Generation was released, band members decided to take a little summer break. They were back in studio at the beginning of autumn, recording some new tracks such as Soundstream Plays 4 U!, which was aired on popular Internet-radiostation Clubberry.FM! In late October vocalist Anna Pazyura joined the band, and after some time they released One More Time.

2011 : they covered Kim Wilde's hit You Came in early February. At the end of the same month Soundstream successfully hit the Radio KPI - a radiostation of the university, where the band founders studied. In May, follow-up song was a collaboration with MC Yama entitled I Believe. It did great in Soundclick.com House chart, reaching #35.

Trying to improve its positions on Asian market, they registered on Singaporean site music412.com, where they stayed #1 in artists rating during a long time. Late August saw the release of a new album entitled One More Time. The most popular song from the new album was Away.

Because of work and studies, the project was paused for a few weeks. Mid-October they were back with Feel It. Following Scooter's example, they chose not to use their previous instruments, at the same time not completely giving up the traditions of their style. At the beginning of December, it was time for a new track : No Surrender, an instrumental song which immediately went into Promoradio rotation.

2012 : Due to some temporary difficulties at the beginning of the year Soundstream didn't record new songs for a long time. There were even some rumors among the fans that the band split, but that were just rumors, which were not true, because in May Soundstream was back with the new hit, entitled Life Can Never Be The Same. But unfortunately later one unpleasant thing happened: rapper Alexander Bulanov (Bulya), one of the Soundstream founders, decided to leave the band. He was replaced by Yuriy Muktarov, also known as DJ Spacedreamer, and it was the beginning of the new life for Soundstream. DJ Spacedreamer was no newbie in music and has already had some success in his solo career as a trance producer. He was very familiar with Soundstream's music before he joined the band and that's why he quickly got on the inside.

In August the song Music Takes Control was out, and it was the first Soundstream's song which featured DJ Spacedreamer. It reached #34 at Soundclick.com Dance chart and it was a big success for a band since no Soundstream song had reached such a high position in that chart before!

In 2013 it was announced that Soundstream were back in the studio, working on a new album, which most probably will be out this year and will be entitled Resurrection. And in early November they presented another new song, entitled We Are Alive, which clarified that they are still on the case. This song sounded very different from Soundstream's previous works, containing 6/8 rhythms (like Basshunter - Now You're Gone) and dubstep elements. Although it didn't charted as well as Music Takes Control in Soundclick.com Dance chart, reaching just #47, but still it wasn't too bad. At the beginning of December We Are Alive reached #1 at German Dancefloor Movement Top-20.

2014 : Owing to this song, in the middle of 2014 Soundstream also entered PROMODJ Top-100. However in the first half of 2014 the band didn't show any activity due to very unstable political situation in Ukraine. In May DJ Spacedreamer was almost a victim of terrorist attacks during his visit to his native town of Kramatorsk, fortunately nothing happened to him. And only in the end of June Soundstream resumed its work and presented a new pure eurodance song entitled One Nation, which was a kind of call for unity of the country. This song reached #30 at Soundclick.com Dance chart, the highest position ever.

2016 : they released single Reach A Star in October.

2017 : Soundstream released Back Once Again in May and Dream for a Better World in July.

2018 : their new album was entitled Way To The Stars. they released new song Summer Nights along with a videoclip.

2019 : in January, Find Another Way hit the stores. In April, they released single Big City Lights. Their next single was entitled Illusions.

2020 : after 2 new singles entitled New Day and It's Time To Be Free as well as a new album Summer Wave, their released a reloaded version of their song Life Is The Fight. In August, rapper Spacedreamer left the project. He was replaced by Sergey Podolsky.

Thanks to Steve, Madenn and DJ FatCat

Listen to Soundstream on Radio Euro Classic, the eurodance radio