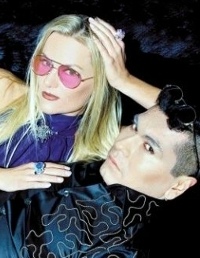 17/02/2020 : Soundlovers's hit Run Away was covered by Shaun Baker featuring Jessica Jean (thanks to Pim).

25/09/2013 : Discover the videoclip of the Soundlovers's new single Be My Man (thanks to Nathan Roby)

13/09/2013 : On her Facebook account, Nathalie Aarts published the picture of a new Soundlovers single sleeve entitled Be My Man

03/08/2003 : The Soundlovers released their new single called Hyperfolk (thanks to Denis DJ Hooligan" Zhabkin). He released a new single entitled Everything I Do (thanks to Alex S).

Nathalie was born and lived for 21 years in Holland (Breda), she had been working with the La Bionda brothers, Gianna Nannini, Adriano Celentano and Right Said Fred but also with various producers as author and as vocalist in various musical projects.

Their first single, Run-Away, was released in 1996 and entered the sales charts across Europe. They followed that initial success with People and Another Day, both of which did fairly well in the clubs. They toured and did live concerts since the release of their first single.

Walking was the first single to be released in the United States. Melodic, energetic, electronic trance pop with strong vocals, it's representative of the Italian dance sound.

In 2001 Nathalie joined as soprano one of the best-known Gospel groups, the No One Else, with which she has been taking part in several concerts in many big theatres and gospel festivals, both in Italy and abroad. She took part to the welfare project Angels 4 Children.

2002 : People 2002 was expected to be the next single of the Soundlovers. Actually it's a track called Flow that was released. Then came Shake Your Ass, in co-operation with Efisio Sergi.

After 2 years of silence, the Soundlovers were back with a new (double) single at the end of August. The single contained the songs Can't Stop Dancing and I'm Not Scared (a cover of Eight Wonder feat. Patsy Kensit). Can't Stop Dancing was already featured on the Italian compilation Dance Parade Estate 2006.

Nathalie has been working together with Kim Lukas since 1999 for various promotions all over the world and with Neja as part of the project Girls Party, the two have become friends, also because of the fact that they have often been mistaken one for the other, so much so that sometimes they are given back the wrong passports at customs. The two have therefore had the idea of singing like "two real sisters"

2007 : Nathalie and Kim Lukas released their first single Change The World. In December, Run-away 2008 was released. It contained new versions coming from Germany and one of their own producers Roby Santini "RSDJ". Alex C inspired slightly from Run Away on his single Du hast den schönsten Arsch der Welt.

2008 : The Soundlovers were back with a new single entitled My Body And My Soul. A cover of Delicious and Marcin Garden (originally released in 1986), already covered in 1994 by Lori Glori.

The Soundlovers at Myspace

Listen to Soundlovers on Radio Euro Classic, the eurodance radio