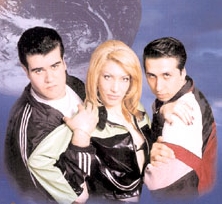 22/03/2012 : Soularis producer Dennis Mavashev is now known as Den Mava. You can discover his most recent remixes and productions.

21/03/2004 : Soularis new single Bye is about to be released. The style is a very energetic eurotrance with a house touch. Julia's voice is very powerful and melodic. The single comes with many mixes, all very danceable (and one acoustic version). You can listen to samples here.

Dennis Mavashev (aka Sniper) was born in Russia on January 6th, 1974. At the age of 9 went to music school and learned how to play flute. After graduation from music school, he on his own learned how to play piano. He wrote his first melody in 1986. He had won an amateur competition in song writing sponsored by the state in 1990. He recorded his first in 1993, after his arrival to USA, where he met his future companion Reginald. Dennis graduated from Queens College in 1997 with a degree in Accounting and Information Systems.

Reginald (Reggie) Chaimov who was born in Russia on July 17th, 1975. He immigrated to the USA in 1979 at the age of 3. He wrote his first poems while he was in elementary school. He went on, winning three major state poetry competitions throughout his high school-career. Reginald attended Queens College and graduated in 1997 with a Bachelor’s degree in Anthropology. Two of his poems were published in college newspapers.

The name was derived from two words : Salaries (Greek for North star) and Soul (signifying the first songs that were written in the style of adult contemporary music).

The duo started as Disc Jockeys in 1994. They performed at many corporate functions as well as nightclubs and private parties with occupancies well over 500 persons. In 1995 they decided to combine their talents and began to compose songs in the style of adult contemporary. They recorded two songs within this style, however they realized throughout their DJ experience that their music was more inclined towards a different age group. As a result, Soularis began to compose music with more dance influences.

Their success was proved by the quantity of people that showed up to the parties at which they performed their newly composed tracks. These parties were designed to attract the attention of many fans of Euro-Dance, Trance and House Music. By the success of these tracks, Soularis realized that they had the material for several albums and decided that they would start production on their first album Avalon. Through the studio at which they were recording, Soularis was introduced to their future female vocalist, Nora Doncheva.

Originally from Bulgaria, Nora immigrated to the U.S. in 1994, leaving a very prosperous music career in Europe. Nora was the lead female vocalist in a group named Model-22 , which made tremendous progress in Europe by performing at concerts and loved by thousands. Soularis and Nora Doncheva became very close in their business relationship and worked with great enthusiasm towards the production of the album Avalon which was released in June 1998. The album was very successful in New York City, Phoenix, and San Diego.

Avalon represents a modern style of music which is highly popular in Europe, Canada, Australia. It is becoming more and more popular in US. The styles that recorded on that CD fall into following categories: Euro House, Trance and Club music. However, track #12 (Best Friends) is totally different. Its an acoustic version of typical soft rock ballad. This music will be appreciated by most DJs and people who like fast tempo tracks with rich arrangement and powerful kicks. Besides captivating melodies, these tracks also incorporate positive meaningful lyrics.

There were also some tracks that were recorded but were not released : Dance Machine, Hello Goodbye, Millennium March, Rush or Space Ride are some of them.

2004 : Soularis is back with a new team. His foundator wanted to expand and collaborate with new people in order to bring a fresh vibe to the style of music he was working in.

The group includes of course Sniper himself, along with three very experimented members : Jazz (a keyboard player and recording engineer who started his carreer back in 1980, and worked with many great musicians), Julia (the vocalist, who already appeared in many music programs, among them Eurovision contest), and Gulliver (songwriter, sound engineer and guitarist).

Another crew member is the group's manager : Alex “Universe”. After promoting hottest nightclubs and raves since 1995, he had been seriously involved with most respectful national and international DJs. He always wanted to play piano and make his own group but was too busy with his schedule. Nevertheless his passion for music kept him going and after a few years he learned a lot in a business aspect of the show business. When he met Sniper back in 1998 they decided to concentrate on a new material that would be suitable for the wide audience.

The first single which came out form this collaboration was entitled Without You (I Feel Blue). The follow-up is called Bye.

Thanks to Aquastealth and Dennis Mavashev himself

Listen to Soularis on Radio Euro Classic, the eurodance radio