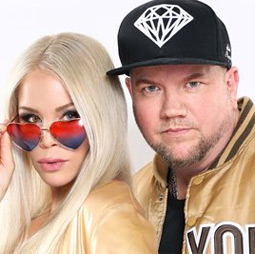 03/05/2019 : Solid Base released digital remastered versions of their abums

21/04/2018 : Solid Base are working on a new single and ask the fans which kind of song this should be. What about suggesting them that they make a eurodance track just like they did in the mid-90s ?

10/06/2017 : Solid Base welcomes a new female vocalist called Veronica. (Thanks to Tavi Meran)

26/09/2015 : After 14 years of silence, Solid Base are back with a new single entitled Wet. New female vocalist is called Camilla Brink and she co-wrote the song with Johan Fjellström.

Solid Base DVDs and VHS

Solid Base was created by the producers Mattias Eliasson & Jonas Eriksson. Isabelle Heitman is the vocalist and Thomas Nordin (or Teo T) the rapper. Their name comes from a synthetizer sound. Isabelle tells how the story began "I heard there was this group called Solid Base that needed vocalists. I was working with a producer that was signed to the same record company. He just told me about the group. So I went down there to do test singing and that's how we met". Teo T adds "We had another vocalist from the beginning. She wasn't that nice though, so we had to fire her and get a new one. So we had like 25 girls there auditioning, Isabelle was the best one. When Isabelle started singing, we all got goose flesh! So here we are."

They started releasing singles in 1994 : Dance To the Beat, Together or In Your Dreams all became hits. So in 1996 they released their debut album entitled Finally which has been selling pretty good all over Europe.

In 1997 they released the singles Let It All Be Sunshine, All My Life and Fly To Be Free. In April 1998 they released a new smashing hit called Come'n Get Me and it was also the first single that was not available on their first album. In August a single called Sunny Holiday was out, followed by their second album : The Take Off. Later in 1998 Solid Base published a single called Ticket To Fly

Solid Base have long since secured their place on the charts in Scandinavia. The gold and platinum records (for the singles and their debut album Finally) speak for themselves in the competitive music trade. Triple gold in Norway (where they now live) and platinum in Finland made the two newcomers one of the hottest groups last summer. Now Isabelle and Teo. T. are ready to conquer the rest of the international music world.

Fresh pop that sticks and with its melodious hook finds its way to the ear. This makes singles like You Never Know (released in 1996) a hot tip in international commercial music. In this case the word 'commercial' is not to be taken negatively. 'We want people to like our music' says the rapper Teo. T. 'Today the expression 'commercial music' is almost a word of abuse but when it comes to the end there is nobody who wouldn't have his songs on the charts and sell well. If our songs go home with the public at large, the better.'

What Teo. T. and Isabelle can do they have proved at numerous concerts all around Scandinavia. Their professionalism has not cropped up by chance but in contrast to many 'One-hit-wonders' that all of a sudden appear out of nowhere and then just as suddenly disappear again. Solid Base have literally a solid base for their career.

'We have had the most varied influences and from that comes our typical sound. Our scope stretches from Classical via Ethnopop, Reggae, Funk and Soul' says Isabelle. From this comes a highly explosive musical mixture which Teo.T simply calls 'Happy Music'. 'In every tune there's a piece of ourselves, for music is feeling.

1999 : a third album entitled Express and many singles proved Solid Base still had its place on the Eurodance scene.

2000 : Solid Base released Push It as their new single. This was a eurodance remix of Salt'n'Pepa's hit single, with raps and great synthlines. Their previous release This Is How We Do It was not as successful as they had expected.

2001 : they released a new single entitled I Like It in March, followed by a new album Party Totale ! on the 30th of April. It is not totally new since it contains many tracks of the previous album, such as Come On Everybody, This Is How We Do It or Sha La Long.

2002 : Solid Base's new album was released on 23rd January, it was entitled In Action.

Note : the track I'm The Girl Of Your Dreams was actually released by antoher project called Solid Base, a Dutch group created by E. van Santen (who also released tracks such as Can't Stop and Pumpin, and also did a few remixes)

2004 : a Greatest Hits album was released

2009 : Sunny Holiday was covered by a project called Bobby Summer.

Remixes by Solid Base


Links to Solid Base

Complete your Solid Base collection


More about Solid Base

Listen to Solid Base on Radio Euro Classic, the eurodance radio

Solid Base on PromoClub - Nouveautés Dance