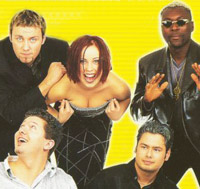 Soda is a Norvegian bubble-gum dance act, which means their music is a happy pop-dance music style popularized by Aqua. The project is built around one female vocalist : Soda (Anne J).

Growing up in Norway, Anne/Soda had to learn to speak English just to know what her parents were talking about. "Whenever parents in Norway are saying something they don't want their kids to hear, they'll say it in a different language", she says. Hers would use English and German, so she quickly learned how to speak both languages fluently. She picked up most of her English by watching American television. The Brady Bunch and The Partridge Family were her two favorite shows. Ever since then she has dreamed of coming to America. Her father was a sailor and traveled around the world. She used to ask him to bring her along, but he said she had to wait until she was 21.

This health conscious singer likes to work out. She enjoys everything from weight training to dog walking and is even into Kick Boxing! She hopes to take horseback riding lessons soon in order to overcome her life-long fear of horses. She doesn't eat read meat but really loves sushi. It's one of her favorite things. She misses her mother's cooking. "My mother makes magic in the kitchen", she says.

Although her pastimes keep her busy, they all fall in line behind her music. She has been performing since she was 6 years old. Like her hero Aretha Franklin, she plays piano and sings. Though she'd love to learn to play other instruments, it's always her singing and the piano that she comes back to, probably because of Aretha. "Aretha Franklin's music touches you in ways that no other singer can", she says of the R+B legend.

The first single to be recorded by Soda was entitled Summer Delight, back in 1997. But the first single to be released was I Wanna Be out in Norway in March 1998. It achieved frequent radiotime, although it was not a sale success. Summer Delight hit the stores in June 1998, while Soda were recording the forthcoming album. In January 1999, the turning point came when 2 Cool 2 B Cool was released. The song hit the radiocharts with a bang, and now Norway was ready to welcome their first album

On the 15th of March 1999 Soda released her debut album Sodapop. The album was recorded in Trondheim at the famous Westside Studios, produced by Thomas Ekle and Jan, and Brygga Studios, produced by Ulf Risnes, between August 1998 and February 1999. Sodapop contained 13 happy dancepop tracks. Most of the songs were written by Geir, Frank and Anne J herself. After its release, it went straight to # 3 on the album charts in Norway, and stayed there for quite some time. In Norway the sales went platinum

Handsome was the first single slated for release stateside. Already a smash in their home country of Norway and creating a buzz in the US, the single had high hopes for Soda. The song and its remixes promised to open the world's eyes to Soda and their club friendly grooves. Soda had planned to release a self-titled American debut in April 2001 featuring songs that had already been amazingly popular in Scandinavia.

In July 2000 she released her second album entitled Popcorn. It stayed 12 weeks in the sales charts, reaching #11 as best position

2002 : the third album Popaholic came out, it stayed 6 weeks in the sales charts, reaching #15 as best position. Anne's hair had turned to blond.