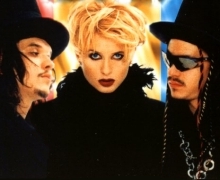 1994 was the year when the Slam project was created in Berlin. Slam has the same producers team as the M & M Crew project (Mike Michaels and Mark "MM" Dollar, aka Triple M) and also the same records company (Triple M-EMI Edition). It featured the female vocalist Axina Schönfeld and the rappers Stefan "Steve" Schleickman and Sten Mehlhorn.

Steven and Sten had been friends since school. After they got their college degree in 1993, they founded their own group called Toasters and created a Raggamuffin-Playback that they performed in the pubs of Berlin. Axina was born in Berlin but raised in Toronto (Canada), from Friedhelm Schönfeld, a reputed jazz musician and Gipsy Schönfeld, singer of chansons. Axina was in Berlin in 1994 to continue her singing, piano and drama studies. She came across Sten and Steven while they were performing in the club Zoo, and she invited them to a session that took place at her producer's studio. Axina's first intention was to record a soul album but Steve and Sten could win her over for the dancefloor groove...

The music of the first single Back To Music was composed by Mike Michaels and MM Dollar. The lyrics were written by Mike Micheals, MM Dollar, Stern Mehlhorn, Axina Schönfeld. It was mixed at Magic Groove Studio, London. A remixes CD followed.

The follow-up was the very nice We Get Around. For this single, the team was different : the music was composed by Empty and Willigerodh (who were also producers), the words were written by Samira Besic (who was also the singer) and Douglas John Wilgrove. Once again it was recorded at Magic Groove Studio.

1995 : U Got To Know (Doodappenbadappen) featured the guest rapper Giorgio.

1996 : For the single Crazy, Mark Tabak joined the team and took part to the composition, production and arrangements. It was recorded at Kit-Cat Flower Studios, LA. On the sleeve of the single one can read "taken from the forthcoming album". A remix was done by Amir Saraf and Ulli Brenner.

Axinia gave numerous performances in clubs, concert halls and on television, also being involved in many studio productions either with trio, quartet, big band or symphonic orchestra. In her various projects she worked together with a lot of well-known artists such as Chris Walden, Malcolm Luker, Neil Stubenhaus, Walter Norris, Reinhold Heil, Udo Arndt, Curt Cress, Deutsches Filmorchester Babelsberg and Friedhelm Schönfeld, just to name a few. She released a solo jazz album entitled When we make love.

Not to be confused with the English techno/funk project Slam (Positive Education, Headstates) nor with the Italian eurodance project S.L.A.M.

Listen to Slam on Radio Euro Classic, the eurodance radio