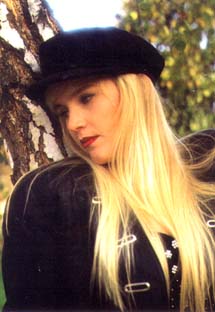 Maria Angela Short was born in Rochford, England on 30th July 1968. From 1971 to 1986 she studied and completed classic, tap, modern jazz and free jazz courses at the "Imperial Society of Teachers of Dance (I.S.T.D.) and the "Royal Academy" of Dance (Association) R.A.D.A. in London with full marks. From 1974 to 1981 she studied classic piano privately. From 1980 to 1989 she attended courses of several "Arts Schools" in London and in Paris, studying ratio-TV and microphone technique, followed by lyrical singing lessons. During the year 1988 she worked with lamented Victor Hagnaw, celebrated recently for his live shows and musical choreographs in America, Paris and Montecarlo where she takes part as solo dancer-singer. The next year she worked with several musicians and studios all over Europe recording jinfols, soundtracks and producing herself with some funky bands.

From 1990 to 1992 she gave her voice for the realisation of Paolo Conte's album Parole d'Amore Scritte a Macchina and participated to the two-year-long tour through the major European cities with more than 160 concerts and the greatest Jazz Festivals as the "North Sea J.F.," Don Hang, "Festival Gérard Philippe", Ramatuelle, Antibes, Juan les Pins, Germ. In 1992, she was featured as singer-actress-dancer in a musical for Sony Music produced by "Interlinea" from Rome and distributed in the United States and then in Europe.

In 1993 she signed with LED records. She recorded her first dance single as lead vocalist for LED Records : Change The Way. The track reached the first places of Japanese dance charts with Avex. In 1994, the follow-up single Had Enough was licensed in many countries and confirm her talent in the dance scene. The same year she recorded her new single entitled My Secrets, released in Japan by Avex and licensed in many European countries. The CD single released in Europe included a Radio Edit mix, an Extended LED mix, a Eurobeat mix and and A Cappella version.

In 1998, after a pause, she recorded with Gino Caria her first eurobeat single titled Bad Angel licensed to Avex. The following year she was featured on several Vibration eurobeat singles, such as Story Of My Life, Light My Fire and Sunshine Of Your Love.

Her 2 last singles were released in Japan on Dancemania compilations.