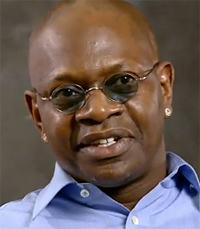 10/01/2020 : Last month, Charles Shaw and The Officer released a Xmas song entitled Christmas Like Back in the Days. He also created a duet of perfumes : LoriD and CS

US rapper and singer Charles Harald Edward Shaw was born in July 4th, 1960 in Houston. As a teenager, he joined the US Army and that's how he arrived to Germany. In the early 80s, he left the Army to follow his artistic carreer.

He is mostly known for being one of the real voices of the Milli Vanilli project, performing the raps on their smash hit Girl You Know Its True in 1988. he later revealed the truth to the press.

3 songs recorded with Silvia Brown, I Leave It up to You, Right On My Pillow and Hold Me Baby, appeared on original motion soundtrack of Czech movie Bony a klid.

The single I'm Feeling was a nice euro-reggae track released in Italy in 1994 under the label Twenty O Nine in July 1994, and in Germany in September undet the labels ZYX and DST. A videoclip was shot for this track. It featured vocals by Sandy Chambers, who appeared in the clip. He probably also contributed to The Pik's single Searchin' For Love.

1996 : The Colour Of your Skin was released in Greece only as vinyl, and on Greek compilation Pure Dance.

1998 : in August, he was arrested in Cologne (Germany) as part of an embezzlement investigation. Shaw had been sought for allegedly pocketing money that was meant to be invested in a 1996 Real Milli Vanilli tour of Hungary.

2000 : Charles Shaw released an updated version of the Milli Vanilli song Girl You Know It's True. He became a member of band Me and the Heat.

2006 : he released an album under the name Charles Shaw's Iris. The disc featured a song called Does Your Mother Know which included the famous beat from Girl You Know It's True, and other Milli Vanilli references.

2008 : for the last 3 years, Charles Shaw has been working on his biography, "which will explain more historical background of what went down behind the scenes of one of the largest scandals in musical history from my perspective", he explains. He is currently looking for a publisher.

2012 : he performed Girl You Know It's True during TV show Das Supertalent.

2018 : he did vocals on My Engine, on song on DJ Cosmin's Two Parties EP. He also released a cover of Girl I'm Gonna Miss You under project name Brown & Sugar.

2019 : he was featured by The Officer on single Christmas Like Back In The Days</p>

He nowadays lives in Mannheim.

Thanks to reBeL, Andrew-FK and Klems