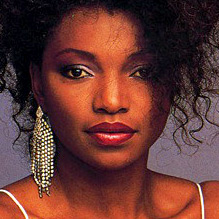 American singer-songwriter Brenda Shannon Greene was born in Washington D.C. on May 2nd, 1958

In 1983, she entered York College. She toured with the New York Jazz Ensemble. Quintin Hicks spotted her while she was singing with a live band in her cousin's recording studio. She auditioned for Liggett and Barbosa with the song She Can't Love You Like I Do. First song she recorded was Fire and Ice, which would later evolve into Let The Music Play.

In September, Let The Music Play was released, and Shannon was invited back to record more songs with Liggett and Barbosa

Let the Music Play hit gold, and became Shannon's signature, called "the Shannon Sound", which would later come to be known as "freestyle". Let The Music Play was also be the title of Shannon's debut album, released in February 1984, and it sold 1.5 million worldwide. Next single Give Me Tonight did quite well in the charts too. It was followed by songs My Heart's Divided and Sweet Somebody.

In 1985, Shannon released her second album, Do You Wanna Get Away. The title track was also the first single, her third single to appear on the Hot 100, reaching #1 on the Dance Chart.

Shannon's third album Love Goes All the Way was out in 1986.

She left her label Atlantic Records in 1987 to record soundtracks and jingles, among them the song Criminal, for the movie Fatal Beauty. She attended and graduated from the American Academy of Dramatic Arts in New York City.

In 1995 she released eurodance song It's Got To Be Love with Italian producers team Zafret/Portaluri/Sion. It was released in Italy under One-Way records records, and in Germany under ZYX. Guitar, keyboards and vocals were done by David Sion. Fulvio Zafret did not only produce, but he also contributed to the track (he did the drums, percussions, and engineering). Bass, keyboards and computer programming were done by S. Portaluri. It was recorded and mixed at Palace Recording Studios (in Udine, Italy). Rapper was Neal A. D. The 12'' had a different tracklisting. It contained 5 versions : Radio mix, Extended club mix, FM Edit mix, Smooth mix, and Dub mix. A remixes package by Joy Foundation followed.

In 1998, she teamed up with Sash! and released Move Mania, which marked the start of her comeback. After the remixes of Give Me Tonight and Let The Music Play in 1999 and 2000, her 4th studio album The Best Is Yet To Come was released in March 2000.

2007 : she released a new album entitled A Beauty Returns.