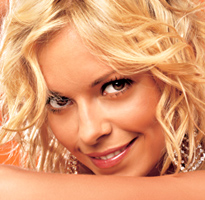 29/07/2012 : September plans to release a new single entitled Hands Up from her current Love CPR album, in the US only (a few months ago, it was rather Heat Rising which was rumoured as forthcoming single). The new album Så Mycket Svartare, recorded in Swedish, will be released under her complete name Petra Marklund on October 24th.

07/07/2012 : September recently announced that she would change her music style. She will be working with Daniel Ledinsky, Saska Becker, and Jocke Berg (from Swedish rock band Kent), on a new album in Swedish language. (Thanks to Eurodance Blog)

Label : Stockholm Records AB
Jonas and Niclas von der Burg along with Anoo Bhagavan stand behind the project, along with vocalist Petra Marklund.

Anoo Bhagavan has been working full-time out of Stockholm as songwriter, lyricist, producer and translator for five successful years, producing material in a wide spectrum of genres and styles. During the last years he has contributed to the creation of close to a hundred songs and/or lyrics for artists and songwriters from all over Europe, for instance Ace of Base, the Danish stars Hanne Boel and Sanne Salmonsen. Together, the 3 producers also work for the artist Milkman.

Petra Marklund (born in September 1987), half Swede, half Slovene, is the living breathing heart of September.

September's first single La La La (Never Give It Up) shot straight up in the nation's charts and has become the biggest dancefloor attraction of 2003. That was followed by another big dance hit We Can Do It and the debut album September in 2004.

2005 : September left their previous records company. September's single Satellite (a rather rockpop song) was #5 on the Swedish Sommartoppen Chart List from SR P3 and it entered top 50 on the danish dancechart. It eventually went platinum in Sweden. The follow-up was entitled Looking For Love.

In October, their new album was released. It was classified by the Swedish musical magazine Sonic as one on the 15 best euro disco CDs ever. Petra's favourite song on the album was the song Cry For You.

The singles were released in Sweden under Stockhlom records, licensed under Kontor in Germany, Robbins Ent in the US and Canada, and Airplay records in France.

Flowers on the Grave was the follow-up of Looking For Love. It was a low-tempo song.

On 29th November the new single Cry for You was released. Deals have already been concluded with over 50 countries, among them USA, France, Germany, Russia, Africa and Australia.

2007 : Cry For You was #1 on Billboard Dance Radio Airplay chart in May. September's new album was released on the beginning of... September. A new single entitled Until I Die was released.

2009 : September's new UK album, called Cry for you the album, was released on 3rd August. The new September single for Europe was entitled Because I Love You.

2010 : Petra could be seen singing a personal version of I'm Sorry, a song originally released by Dilba (sister of E-type's dancer Dee). Maybe her next single ? Finally not. In November, the new single Resuscitate Me was released. Videoclip was directed by Patric Ullaeus.

Petra took part ot the real-TV show Så mycket bättre on TV4 with other famous Swedish singers. Every candidate had to sing their version of the other candidates' hits. Petra's performance singing Mikrofonkåt (a song originally performed by rapper Petter) had over 500 000 views on Youtube, so it was finally decided to release it as a single too. In December, September released an English version of Mikrofonkåt entitled Me And My Microphone

2011 : in February, after a only a few days, the newly released album Love CPR was already certified gold in Sweden. In May, Petra was chosen as Pepsi Refresh's new ambassador. In July, it was revealed that September's next single will be entitled Party In My Head. Petra told a fan that she would shoot the videoclips of both Party In My Head and Me And My Microphone on July 18th.