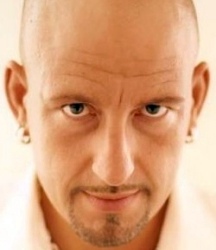 05/11/2019 : Klubbingman's next collaboration with Andy Jay Powell will be entitled Waiting and is planned for November 8th

13/06/2019 : Next Klubbingman & Andy Jay Powell single will be entitled Butterflies.

20/01/2019 : Klubbingman and Andy Jay Powell will release their new single All The Time on February 8th.

02/10/2016 : Klubbingman's new single will be entitled Hymnophoria and it will premiere tonight in Tommy Schleh's club Kinki Palace in Sinsheim Germany.

Born December 10th 1964 in Neckarbischofsheim. He's been DJing since the age of 14. He was a DJ in a discotheque of London, called Legend, when he met Enrico Zabler. They discovered that they both lived in Germany 15 km one to another. Rapper and co-producer of Masterboy, he also co-wrote and produced Cardenia's album Memory for Masterboy Beat Productions under the pseudonym of Jeff Barnes. He likes snowboarding and drives a Porsche. He also does some body-building.

2002 : Tommy is back under the pseudonym Klubbingman. He is resident DJ at the Kinky Palace Club (in Sinsheim, Germany). He also has his own radio show called "Welcome to the club" (every tuesday from 8 PM to midnight, European time, on Sunshine live radio station). He also released 2 singles : Welcome To The Club (which ranked #71 in the German sales charts), and then Open Your Mind (styaed #58 during 6 weeks in the German sales charts). A full compilation album called In The Mix 1 followed.

He took part to the Dance United project, created to help the victims of the floodings in Germany. They released a single called Reach Out on the 30th of September.

2003 : he released in February, still under the name Klubbingman, the single Highway to the Sky/Miami Bass. Then came the very successful No Limit On The Beach. He created the trance project TJ with his partner Enrico, and they released an uplifting track called Mellow Claps under WEA. In July he took part to the LoveParade. Then he contributed to the Double U Boys and released the single Around My Dream (origianlly sung by Silver Pozzoli).

2004 : in May he released a compilation mixed by himseld called Welcome To The Club vol 1 (it included a previously unreleased track of Klubbingman called Wonderland) and in July he released the single Magic Summer Night. He founded with Enrico the label Klubbstyle.

2005 : Klubbingman's new single was entitled Revolution (We Call It) and it featured Trix Delgado's voice. It was played for the first time by Tommy himself on his radio broadcast Welcome To The Club on Sunshine Live radio on the 24th May.

2006 : the new DJ Klubbingman single once again featured Trixi, who now prefers to appear as Beatrix Delgado. Ride On A White Train was out at the end of July, as 2 vinyls. The first vinyl will include mixes by von DJ Manian, Klubbstylerz, Nomansland as well as the Originnal Club Mix. The second one will include mixes by the Real Booty Babes, Axel Coon and a special mix for the Love Parade 2006 (to which Tommy will take part).

He released in Singapore 2 CDs compilation on EQ Music label (just like Masterboy did some monthes before).

2007 : Klubbingman's next single was once again a superb collaboration with Beatrix Delgado : Never Stop This Feeling. It reached #77 in the Media control charts. The same year, his 10th Welcome to the Club mix compilation was released. In October, he released under the alias Sunshine Live Inc. the single The Sound of Revolution (we are one). An album entitled The Fan Album was also planned.

2008 : In February, Welcome to the Club Vol.12 was out. The jumpstyle track Der Holländer - Das Rote Pferd (based on Edith Piaf's Milord mellody) was released under his label Klubbstyle and was very succesful in Germany. Tommy started the sublabel Klubbhouse, under which he released his single Okay (Tell me) under the alias Tommy Jay Thomas.

Under On May 2nd, Welcome to the Club 13 was released.