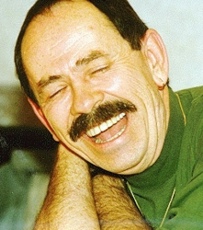 John Larkin was born on March 13th 1942 in El Monte, California. He was for years content making a living as a singer-pianist in the grand hotels of Europe. End of 1994, everything changed : his unique style of 'scat-rap' took the world by storm. Combining traditional scat singing with a driving dance beat blending dance-pop, hip-hop and jazz influences (he used to work with stars of jazz such as Al Jarreau, Ella Fitzgerald and Charlie Parker), Scatman John reached the top of the European and Japanese charts with the singles Scatman (Ski-ba-bop-ba-dop-bop) and Scatman's World.

The story of his success begins back in the summer of 1994 when John Larkin (Scatman's real name) was performing at the Alexandra Hotel in Norway. One afternoon, his agent called and proposed the concept of 'scat-rap'. Always game for something new, Larkin spent six hours in a recording studio, unsure what the finished product would sound like. With the help of producers Antonio Catania and Ingo Kays, the first song, Scatman (Ski-ba-bop-ba-dop-bop), was completed and just weeks later skyrocketed to No. 1 on the Eurochart. The song, which was released in the US as a CD single off RCA Records' Club Cutz dance compilation and can be heard on the soundtrack of the soon-to-be-released Touchstone Pictures film Nothing To Lose starring Tim Robbins and Martin Lawrence, has sold more than two million copies world-wide to date. It was the second most sold single in France for the year 1995.

He sold eight million CD's, has had two No. 1 singles in almost every country in the world, counts 14 gold and 18 platinum records to his credit, and even had his image imprinted upon millions of Coke cans across Europe. Zoot-suited Scatman John exploded on the American music scene with his new single Everybody Jam!, released this summer on Logic Records /BMG. But the did not affect him that much.

Scatman was covered by Boys On Scat, by the Spanish project Gemini and by the Japanese band The Axel Boys Quartet. A feminine version was also done by a project called Scatgirl.

The follow-up single, Scatman's World, was released in 1995 and scanned sales of well over a million copies. The debut album of the same name, released in the summer of 1995, sold more than 3 million copies. Scatman John was given the 'Artist of the Year' award in Japan, has received the Golden Europa award for single sales, the Echo Award in Europe for 'cross-over artist of the year', and an MTV Europe Music Award in the Best Male Artist Category, alongside Michael Jackson, Dr. Dre, Neil Young, and Lenny Kravitz. Scatman-mania has, without a doubt, circled the globe. "At an appearance I did in Spain, the kids screamed for five minutes straight, I couldn't start the song," he recounted. "To have young people all over the world going 'ski-ba-bop-ba-dop-bop' is as good as it gets."

One of Larkin's greatest joys is the impact his music has on impressionable young ears. As someone who has struggled with a stuttering problem since he was a child, Larkin hopes that the Scatman story will encourage young people to never let a perceived problem or disability hold them back. 'I'm the Scatman because I stutter,' he explains. 'In my childhood, I had to find some other way to express myself. As a person who stutters, scatting came along real easy because they are both real close.' Scatman John was recipient of the Annie Glenn Award for outstanding service to the world's stuttering community.

'My greatest problem in my childhood is now my greatest asset,' he continues. 'I'm trying to tell the kids today that Creation gave us all problems for a purpose and that your biggest problems contain a source of strength to not only step over those problems but all our other problems as well.'

Scatman John's new single is certain to have everyone - young and old - listening closely to his words and thoughts. On Everybody Jam, he turns his attention to his love of jazz, paying respect to his childhood idol Louis Armstrong. 'Here I have the chance to present one of the greatest forces the world of Jazz has known. Since my childhood, Louis was the first and strongest influence on my musical existence. There have been many masters of music, of soul, but for me Louis is the father of them all.'

Once again, producers Catania and Kays were involved in the direction of the second album, also titled Everybody Jam. The renowned Viennese video director Hannes Rossacher and his DoRo team are responsible for the video for Everybody Jam! Fittingly, it was shot on location in New Orleans, the birthplace of Louis Armstrong. 'The day we shot the video was a day beyond all boundaries of time and space. Full of magic. All of the images together created the perfect atmosphere for showing the heart and soul of Louis Armstrong's roots.'

Released during summer 1996 on Logic Records/BMG, the single was jovial, youthful, and a perfect example of Scatman's boundless energy and creativity. Everybody Jam! has also been remixed for the dance floors by famed remix teams Vission & Lorimer and Rhythm Masters for both the 12-inch single and CD-5.

At the same time in Japan, John was everywhere. He made the television circuit usually performing Scatman (Ski Ba Bop Ba Dop Bop) or Everybody Jam!. He was also hired to appear in 2 Japanese commercials, one for a pudding snack (3 spots, featuring the track PriPri Scat) and one for cosmetics (featuring the song Su Su Su Super Kirei). Super Kirei (means "super beautiful") was the second track off this album to spawn a music video. The video showed John in a featureless room riding a mini trike, producing flowers like a magician and dancing around. He was also filmed in a basement and a cgi kitchen. Then Let It Go was also released as a single, although the album version did not feature on it.

After John's death, the Take Your Time single was re-released. This time it had only 4 tracks and a banner on the cover which mentioned "In Loving Memory Of Scatman John".

2000 : Listen To The Scatman was released. This was an album celebrating the Jazz work of John Larkin, although the last track was a dance track with scatting taken from various different songs on the album. The songs Last Night I Dreamed and Softly As In A Morning Sunrise were taken from the 1986 self-titled John Larkin album. The rest of the album consists of staple Jazz classics. There was a one track CD issued to promote this album. It was Listen To The Scatman, the dance track added to the end of the album.

2009 : Mark'Oh released a cover of Scatman John's Scatman in October