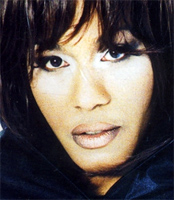 08/03/2016 : New from Regina, single Shake It Up, with 2 versions by remixer Randy Norton. Original version was released some time ago for eurodance compilations only. Out on March 25th under DMN Records. (Thanks to Krasi)

17/04/2015 : Regina recorded a new single with Rafael Lelis entitled Let Your Body. They plan to spread it for free from April 30th (Thanks to Krasi)

28/02/2015 : New from Regina, Hit Collection, a compilation of her most recent releases, out under DMN Records (Thanks to Krasi)

13/01/2015 : Regina is shooting videoclip to her last single Wanna Be Free, which had a lot of success in the Brazilian clubs and stayed over 10 weeks in the Swiss Top 100 Chart (Thanks to Krasi).

10/07/2014 : Regina was featured by Biagio D'anelli on his single Girl from Ipanema. Videoclip was directed by Cristel Carrisi. (Thanks to Krasi)

Singer, dancer, actress songwriter Regina Aparecida "Queen" Saraiva was born in Sorocaba, São Paulo (Brazil). She began her singing career in 1989 with the group Forbidden Fruit, that she left in 1995. She developped her interest in dance music to become one of the most popular shift-workers in the sector. She worked as a session singer for Discomagic Records, doing vocals for projects Jean Jane, Without Words, Groovy Collective and Carol Lewis.

She could also be the vocalist of Klouds 6/2 Zombie, and for the following songs :

With Nitelite Records, she released in 1996 the first album Situations including dance cover of Killing Me Softly as well of other covers of some of the best songs of the '60s. Killing Me Softly topped the charts during 8 weeks, the album was best-selling album in Italy, with a total presence of 19 weeks in the charts. In 1997 the second single Day By Day was a hit : it remained over 3 months in the Italian chart. It was also very successful particularly in France, Germany and England. Single was remixed by the prestigious international DJs like Mark Picchiotti (formerly remixer for artists such as Madonna and Lisa Stansfield) and Dancing Divaz.

After two months, as summer was coming close, a videoclip was shot, and immediately created a lot of noise. The video, which faithfully reproduced the text of the song, was a real short film which in some places was judged too raw and truthful : the scene of a homosexual kiss was censored by MTV UK and by some French TV. Given the song's huge success, a second softer version shortly followed. This new "packaging" allowed release in America, where it peaked at #11 on Billboard Magazine's Hot Dance Music/Club Play Char, and later in Japan and South America. Day By Day soon became a gay anthem, Regina was one of the leading artists of the "Gay Pride" event that year , and this took her on tour in Europe with Jimmy Sommerville, Martha Wash, the Vengaboys, and 666.

In January 1998 Regina released her 3rd single Close The Door. The same year, 2 more singles were taken from the album : What Can You Do and Up On The Floor.

2000 : Regina was back with a new single entitled You And Me which retraced the footsteps of Day By Day.

2001 : throughout the winter, Regina and her producers, Max Moroldo and Francesco Marchetti in collaboration with Benny Benzy, entered studios again. The result were the songs You Do not Fool Me (a commercial dance cover of Queen's song ) and Secret Mission (new remix of a song from the previous album Situations). She took part to It's Christmas a collective single with Nathalie Aarts, Davide Marani, Carolina Marquez ‎ and others artists

2002 : Regina released I Am Back on the label Do It Yourself, with three versions, in addition to the Original (Ghost Radio for cds, Ghost Extended for vinyl), the Vanni G. revisited by Vanni Giorgilli (the Extended support is only on vinyl) and the Cheesy & Tachy (both media).

2003 : she was featured on Neffa's I Molteplici Mondi Di Giovanni Il Cantate Neffa album, singing a song entitled O Tempo eo Vento that she co-wrote with Neffa. In Brazil and in France he did his first experiences as an actress, where he worked with Irene Papas and Philippe Leotard in the movie "The Banquet" by Marco Ferreri.

She lives in Milan, Italy, where she is part of the gospel choir featured on Piero Chiambrettis TV program "Markette" broadcasted by La7, and also appeared in Chiambretti Night on Channel 5.

2013 : Regina Saraiva is back with a new single entitled Imaginaçao under DMN records

Thanks to Krasi and Andrew-FK