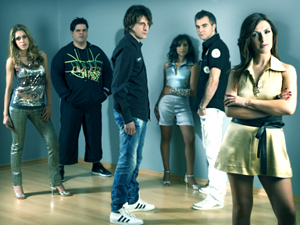 30/01/2020 : Santamaria presented their new single Eu Fui Eu during show Praça da Alegria. They will soon announce the dates of their 2020 tour.

11/10/2017 : Santamaria's new single is planned for October and will be entitled Não Quero Mais (Perder).

07/07/2015 : Santamaria will release their new album Gold on July 20th. They will present their new singles És Tudo and Não Sejas Assim next Sunday during show Somos Portugal on TV channel TVI.

21/06/2015 : Santamaria's new single is entitled Es Tudo. Their next album will be entitled Gold and it will be out soon.

Their style evolved with time, from very nice eurodance (first albums) to more recently eurotrance and a little bit hands-up. In 1999, they even did a duet with Whigfield (actually Annerly Gordon). They also covered Lasgo's single Something.

All albums were released under the label Vidisco. Santamaria did not seem to release any real singles (no vinyls or CD maxi), but some of their songs appeared on compilations and they shot many videos, which can be considered as singles.

1999 : Their second album Sem Limite was very succesful contributed to make of Santamaria one of the most famous portuguese groups ever. The album contained the duet with Whigfield in a portuguese/english remake of Happy Maravilha.

2000 : the third album Voar had less success than the previous one.

2001 : Reflexus the 4th album was released as special edition with 3 new tracks (from the normal edition) and an interactive track (with lyrics, videoclips and other extras)

2002 : they decided to make a pause during which Filipa got married and had a baby.

2003 : the album Boogie Woogie, a sort of best of, included also a DVD with all Santamaria's videoclips as well as an interview. It did not sell as well as expected.

2006 : they released theire eighth album, simply entitled... 8. A best of CD including a DVD of their videoclips shortly followed. They left their former records company Vidisco and got signed under La Spacial.

2007 : Elements was the title of their new album. A new member joined them, DJ Lucana.

2008 : their new album Virtual was released in June. Then, they released a live DVD in October that was recorded during the concert of August 8th in Porto, which went back on their 10 years of carreer.

2009 : Santamaria released their new album Xplosion in July. It hit the Portugese charts, reaching #8 this summer. The first song to be taken from their tenth album is called Eu sem ti... (Alma perdida), followed by Na alma do amor. In October, Xplosion was awarded platinum.

2010 : in spite of their fans' wishes, they won't be competing Eurovision Song Contest 2010. A new album, Play, was released in June, along with a new single : Tudo de mim (Para ti)

2012 : their new single was Let's Go To Afrika, created for the Olympic Games. Their new album Let's Dance followed.

2015 : they released their new album Gold on July 20th and presented their new singles És Tudo and Não Sejas Assim.

Listen to Santamaria on Radio Euro Classic, the eurodance radio