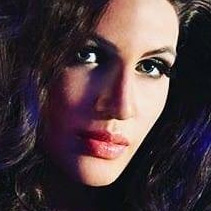 08/08/2019 : Former Paradisio frontlady Irina Sanchez posted another snippet of her forthcoming single De Noche. She will perform it during I love 90-2000 festival in Mexico City on August 31st.

Mona-Lisa (Irina Sánchez) was born on June 24th 1993 in a small town subjected to a terrible dictatorship and misery. Her first 3 years were spent in an orphanage in Romania before a Belgian family adopted her.

Her father had a small family piano business and that was how Irina had her first approach to music. Having never heard French before, she learned her new language quickly thanks to the help of listening to French songs. Her - now parents - instilled in her the arts and singing from a young age without knowing the artist that she would become.

From the age of 5, she became passionate about art in all its forms and entered the music academy where she learned violin, music and singing. She also discovered a passion for the performing arts and took courses in theatre, diction, declamation and improvisation, areas in which she won several competitions.

Already at age 8, she was convinced that performing at stage was her passion, and that is where she began her preparation in contemporary dance, jazz, classical dance and cabaret in particular with a professional Russian dancer.

During his adolescence, she sought to study something that could incite society to become involved in the world of the arts and stimulate freedom of expression, so she began her career in psychology, successfully completing it in 2010 with a specialty in psychopedagogy.

Along with all this, Irina became the muse of many photographers and had her first approach to the world of fashion and acting. Endless projects, commercials, shootings and catwalks wrapped her life.

Not satisfied, she left Belgium to live for 6 months in New York. When she came back, she specialized as a wedding and event planner and then open her own business as a fashion event planner. In spite of everything, she never leaves aside the world of the arts and continues to prepare and attend castings to remain active in the field.

At the end of November of 2017, she heard that her beloved band from her teens, Paradisio, was in search of new vocalist. Without thinking over, she started the auditions, demonstrating her talent, and was selected to occupy that coveted place. She was part of the band until March 2019, as she decided to start her solo career and explore her own style.

Her first single, De Noche, was ready for release at the end of July of this year. This song claimed to be an international success since it was a collaboration with Jake Boncutiu, renowned producer who has worked with successful artists like Inna. The sound of this new tune was Latin, with a cool dance rhythm and a touch of reggaeton.

A great tour is cooking along with the recording of their first studio album.