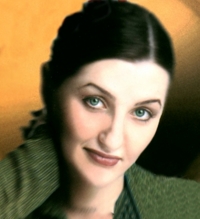 17/09/2016 : Samira's current project CLIC released a new album entitled Once Upon a Time (Thanks to Tavi Meran)

12/01/2012 : Eurodance Blog organizes a mash-up contest around Samira's eurodance songs (solo singles or featurings by Maxx, Slam, etc). The winner will be promoted on Eurodance Blog.

07/01/2012 : Samira teamed with Yann Garcin, Samuel Junus and Sebastian Höhmann to create the band CLIC. More infos on their Facebook account. (Thanks to Eurodance Blog)

24/06/2011 : Samira confirmed that she could be back on the dance scene. She recorded a dance track. More infos to follow... (Thanks to Tavi Meran)

13/05/2011 : Samira will be performing live next week-end for Mokum's 5th anniversary in Prenzlauer Berg, Germany. More infos here (Thanks to Eurodance Blog)

Samira is a solo artist, daughter of Bosnian parents and born and raised in Germany Berlin. She started her musical career in 1992 singing the hit-single Getaway for the project Maxx. Samira couldn't appear on the video-clip and so Alice Montana was engaged to give Samira's voice a face.

Then she started a solo carreer. Her first singles were the excellent When I Look Into Your Eyes and Love Train. Released under Shift Music label, these 2 singles were very succesful in Europe and all over the world. When I Look Into Your Eyes was written by Douglas John Wilgrove and Samira herself, composed by Mike Michaels and Mark Tabak (of Triple M). It was at first released as vinyl in October 1994. The single CD, out in January 1995, was followed by a remixes CD including remixes by Cabballero. It reached # 3 in Israel.

Love Train, out in 1995, included a B-side entiteled Fairvoice (written by V. Lindner). The third single was entitled The Rain, in the stores in 1996. This low-temp track was written by V. F. Bell, and peaked #4 in Israel. It was licensed in France under WEA.

Samira appeared as a singer, songwriter and composer on several other projects. She took part to Slam's single We Get Around and Bongo Beat Do What You Want, as well as Wanna Hear The Music by GE ConXion.

Then she released another solo track in 1997 : I Can't Get You, written by K. Madison, C. S. Hill, and Samira herself.

Samira made an unexpected comeback in 1999 with a track with did not really sound eurodance : It Was Him. The track was written by François Berhneim, produced by Kalvin Madison. The rap attack was done by Bad Maxx. The single was released in France under the name of La Plage (It Was Him). Melody reminded of a 1970 German TV commercial for Lenor.

A 2020 remixes package by S.Martin and Pit Bailay was released for The Rain. Samira's band Clic released a new mini- album entitled Way Out

Thanks to Samira herself, to Astralys

Listen to Samira on Radio Euro Classic, the eurodance radio