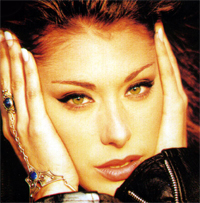 17/03/2020 : Sabrina Salerno along with other celebrities, recorded a video to tell people to stay at home during Covi-19 health crisis

01/12/2018 : Yesterday, Sabrina released a new single entitled Voices along with a video. It included a French version. A new album is planned for 2019.

19/10/2016 : Sabrina is re-releasing digital remastered version of her former hits and albums.

Her real name is Sabrina Debora Salerno. She was born in Genoa, on the 15th of March 1968. She was raised by her aunt until the age of 5 since her father didn't acknowledge paternity and her mother was not present for her. She then lived with her maternal grandparents in San Remo.

Until 1986, Sabrina - then a former Miss Liguria and young TV-presenter in Italy - had only sung occasionally on TV shows, recording songs such as The combination and Uragano (Io mi muovero '), and appearing in TV films such as "Ferragosto OK", "Professione vacanze", "Grandi magazzini", "Delirium" and "Tutti in palestra". But that changed soon, as Italian music-producer Claudio Checchetto decided that Sabrina should test her talents in the pop music business, too. The result was Sabrina's debut single, entitled Sexy Girl, which was released in Italy in the beginning of 1987.

Then came Sabrina's second single, Boys (Summertime Love), the song Sabrina is still most remembered for today. A typical Italo-dance pop number with a catchy tune, it became a huge summer-hit very soon in Italy and many other countries around the world. After this enormous success, Sabrina's team tried to score another international hit with a new single : Hot Girl, included on Sabrina's by then-released first album. But it did much less good than it's predecessor

Then came Lady Marmelade, released in France under its French title as Voulez-Vous Coucher Avec Moi.

1988 started with another success for Sabrina: All Of Me, a happy dance-single which had been produced by the legendary production-team of Stock/Aitken/Waterman in the UK, became a hit in several European countries. My Chico was Sabrina's second single in 1988, and another big success. The song reached the # 1 position in the Italian singles-chart, and was quite successful in other European countries, too. She played a role in mini TV-series "Festa di Capodanno".

Then came Like A Yoyo, released as a single in Italy and France at the end of 1988. It was Sabrina's first collaboration with disco-legend Giorgio Moroder. The following singles Sex, Guys And Dolls, Pirate Of Love, and Doctor's Orders (produced by Gianfranco Bortolotti) were only released in a few countries.

Gringo, released in 1989 was in many ways the official successor to 1988's My Chico. It was once again written by Sabrina herself and Elvio Moratto, just as the follow-up single Yeah Yeah.

1989 : Sabrina appeared in the movie Fratelli d'Italia, a film in 3 episodes.

In 1991, Sabrina teamed up with Italian starlet Jo Squillo (real name Giovanna Coletti) to record the song Siamo Donne. It was her first duet, and her first Italian-language single. They performed the song at 1991's San Remo music-festival but the song didn't really become a big hit. Then came Shadows Of The Night, a track from 1991's Over The Pop-album, which was released in Italy only. The follow-up Cover Model (the second single - produced by Pier Rossini - in Sabrina's career that never made it's way onto an album) was only released in France (where is was a success) and Italy. Afterwards we did not hear of Sabrina during 3 years.

She made a comeback with the single Rockawillie in 1994, a dance-track very much in the style of her 80's recordings. Then came Angel Boy, her most eurodance-like song, even including a rapper (the famous Tony Dyer). Song was covered by Russian project Elen i Rebiata under title Anghel Moi.

In 1995, Sabrina teamed up again with her one-time collaborator Elvio Moratto to record a new version of her 1987 hit single, Boys (Summertime Love). Moratto himself made three mixes of the new recording, while a team of DJs prepared a complete remix , the NYDP Mix.

Only one track was released as a single from 1995's Maschio Dove Sei album (first album to be released under her complete name Sabrina Salerno), it was entitled Fatta E Rifatta.

1997 : Sabrina appeared in the movie "Jolly Blu". She also played a role in the sticom "Tutti gli uomini sono uguali".

1999 : Sabrina released a single entitled I Love You. In January a new album was finally released : A Flower's Broken.

From 1999 to 2001, Sabrina toured all around Italy with the successful musical "Emozioni", achieving good reviews form the critcs.

2002 : a new album in a new musical style, in collaboration with a famous dance producer, was planned for release. The album would include a duet with a famous dance music singer... But nothing came out. Sabrina co-presented the TV-show Matricole & Meteore on the Italian TV channel Italia Uno.

2003 : a compilation gathering all songs of the musical Emozioni was released.

2004 : Sabrina played the role of Colori's mum in the movie "Colori". In April she gave birth to her first child, a son called Luca.

2005 : She released a new single entitled I Feel Love (Good sensation), a dance track with a touch of disco. But she won't be able to release her new album. She appeared in the movie "Colori".

2006 : Sabina obtainind the main role in the Italian movie "Film D" (directed by Cristiano Ceriello). After 16 years of absence in Russia, Sabrina did a triumphal live gig in Moscow.

2007 : Sabrina was on be tour with the RFM 80s Party, a series of concerts taking place in France's major cities between October and December and featuring many 80s artists.

2008 : Sabrina released a new album entitled Erase / Rewind Official Mix on October 3rd under Edel Music Italia. It contained 26 songs, half were remixed songs, the other half were unreleased songs. In December, her video for the single Erase/Rewind, a cover of The Cardigans, was presented.

2013 : in January Sabrina and Samantha Fox released new remixes of their duet Call Me, made by Stefy De Cicco and Christian Vila & Cosme Martin. In July, Sabrina was featured on Neon Neon's single Shopping (I Like To), available on album Praxis Makes Perfect

2014 : Sabrina Salerno will take part to real-TV talent show La Pista on Rai 1 from March 28th. She competed agains 7 other VIP candidates to show their singing and dancing skills in front of a jury. She released a new single entitled Colour Me

Listen to Sabrina on Radio Euro Classic, the eurodance radio