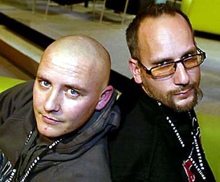 The first singles with Daniel "Papa Dee" Wahlgren Competition Is None and Microphone Poet became hits in the major cities. After that, Got To Get feat. Leila K was released, it also became a hit around the world with over one million singles sold. It was followed by Rok The Nation (co-written by MC II Fresh), Just Tell Me (with backing vocals by Lizzie Zachrisson, it was not very successful) and It Feels So Right (which flopped too), still featuring Leila's voice. Afterwards, Leila went solo.

A world tour followed, the duo being the Swedish artists to appear on the scene of the legendary Appolo Theatre in Harlem. During the 90's, Rob'n Raz released several hits featuring different artists. For instance, Lutricia McNeal and D-Flex (aka DLC) contributed to the singles Clubhopping, Bite The Beat, Take A Ride, Whose Dog Is Dead and In Command. Power House is the only one among all these hits to be still played on the dancefloors across Europe. It's All Good featured the voice of Kayo in 1995.

Afterwards, Lutricia started a very sucessful solo carreer. D-Flex too, but he only released 2 singles : Don't Disrespect (in 1999) and Friday Night (in 2000).

Robert and Rasmus also did remixes for other artists (such as DJ Bobo's Respect Yourself). They also contributed to many TV shows : they presented the Swedish Dance Chart on Z-TV for several years. They took part to the jury of the broadcast Mini Stars on TV4, they also contributed to Turn and return on TV3. They created the show Star towards being a star hosted by Rob'n Raz on Kanal 5. They presented the Morning show on Powerhit Radio and had their own national evening show on Radio City during the 2 past years.

Rob'n Raz are maybe still the greatest DJ-names of Sweden and are still playing on clubs nationwide. Everything from the most current music to "old school evenings" with 70's, 80's and 90's. Rob'n Raz also acts as MC's and hosts on events, company arrangement, presentations, exhibitions etc. Among pleased customers are Sharp, Vin & Sprit, Intel, Minolta etc.

2000 : with Markoolio, they contributed to welfare compilation Barn 2000 to help raise money for Rädda Barnen (Save The Children).

Thanks to Mikoo and Anders Bøgh

Listen to Rob'n'raz on Radio Euro Classic, the eurodance radio