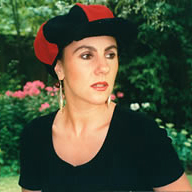 Jackie Rawe started singing at the age of 17 and worked in dance bands for 18 months. Her first bands were The Ross Mitchell, and Ray McVey Bands. Then she got my first tour doing background vocals for Suzi Quartro. They toured Poland and Romania and it was on this tour that she met Gill Saward who introduced me to the Shakatak guys. Shortly after the Suzi tour Jackie toured with Sheena Easton, in the UK, America, Canada and Japan. After touring with Sheena she started working with Shakatak. At this time she also had two other projects going on. One was a band called Enigma and we had a top twenty record called Ain’t No Stopping and did Top of The Pops, and the other was called Minnie and the Metros, (I was Minnie of course, being only 4’ 10 3/4”). The record was called Charlie’s angel and was released through EMI.

Of all three projects Shakatak started to take off big time so she devoted my time to the band. They became famous in England, Japan and Europe. Jackie recorded three albums with Shakatak: Driving Hard, Nightbirds and Invitations and the later two went Gold. She left after the third album to work freelance but did work with them occasionally on other albums and tours. Straight after Shakatak she toured with Imagination and then Gary Numan. She also recorded one album with Gary, Machine and Soul.

In between the tours she I released a solo record : I Believe in Dreams, first released in 1985 on Fanfare Records. She re-recorded the track with Almighty Records in 1997. She was also featured on dance tracks by Midnight Sunrise : On The House and In At The Deep End (released in 1986 on Nightmare Records). In 1987 she recorded a duet with Paul Carrack ( lead singer with Mike and the Mechanics), called When You Walk in the Room which was released on Chrysalis.

In 1986 she started writing my own songs and had her first cover in 1987 with American artist Micky Howard. The song was called Baby Be Mine and went to number 5 in the American Soul charts. She co-wrote this song with Ashley Ingram, songwriter and bass player from Imagination. She signed a publishing deal with Warner Chappell Music in 1993 and have had songs covered with artists worldwide.

In the 90’s she did vocals and co-wrote a track called Kingdom of Love by Massivo, released on Debut.

In 1993 she had her son Zach and stopped touring to do session work. She was much in demand both as a session singer and as an accomplished songwriter. She has sung on many chart records including Elton John (Something About The Way You Look Tonight), Celine Dion (Think Twice) and Cher, and have been heard on many radio and TV jingles and adverts. She sung on Zeitia Massiah's 2 first solo singles, and on demos by Tony Di Bart. She recently confirmed she was the voice on Cappella's hit Move It Up. Under the stage name of Tasmin, she became the vocalist of Almighty records project Deja Vu. She also contributed to 2 songs of the project Bianca.

In July 2003 she joined a classical band called The New London Chorale. They recorded a Live album in Holland in September 2003 where the band have been established for 15 years. She has written one lyric on the new album The Young Mendelssohn.

Jackie just finished recording a solo album of songs with a spiritual, inspirational, and devotional nature in the lyric. The songs chosen were written over a twelve year period, and the musical flavour of the tracks varies from soul, funk, gospel, blues and jazz.